Royal Fuzz tore the roof off of the Dakota Tavern

Posted by: Bulletin News June 23, 2017 Comments Off on Royal Fuzz tore the roof off of the Dakota Tavern

Have you heard of Royal Fuzz? And no I don’t mean that little patch of hair that signals a prince’s entrance into manhood. I’m talking about the modern metal band reminiscent of artists like Iron Maiden and Skid Row that is making its way into the Toronto music scene.

This reporter awoke this morning with a sore neck from the involuntary head banging caused by the driving sound—but hey, that’s just the price you pay for rocking out. 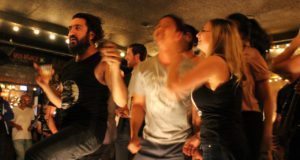 The band invites the crowd to party with them on stage. 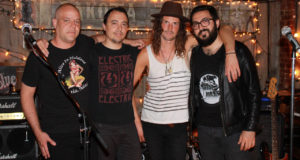 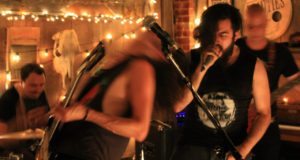 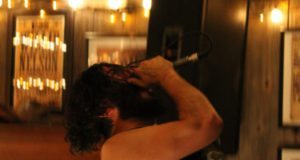 The Dakota Tavern at the corner of Ossington and Dundas was packed with energy last night when the band took the stage. Everyone seemed anxious and excited for the show to begin—perhaps because the guys started fashionably late, or maybe it was because the crowd knew they were about to be musically assaulted by the power of Royal Fuzz.

“Rock and roll screamed at that top of one’s lungs” best describes the sound and the feel of the band.

Guitarist and singer Eddie Orso laid down some chunky guitar riffs and blinding solos, while lead singer Dave Ambrad pushed his vocals to the max. Drummer Scott Corman pounded the skins, and it was his kick that resonated through the bodies of the partying crowd.

Nick Kruppa played bass. His thick rhythm was the ground needed to support the heavy sound of a band that plays as hard as Royal Fuzz. And that was what everyone in the audience was fully aware of: Royal Fuzz plays hard. The band also works very hard and they are completely independent, funding their own record label, tours and merchandise.

Before the show, this reporter got a chance to meet with the guys and talk about their music and plans for the future. What started as a long-standing friendship between the four metal heads distilled into the Royal Fuzz project in the spring of 2014.

“We wanted to see more of each other,” Orso said. “One jam turned into two jams turned into ‘Let’s form a band.’”

Speaking about their sound guitarist Orso said that the band begun with him as lead singer and Ambrad on guitar. After recording Fox Fuzz, Orso started to develop nodes in his throat from screaming and he would have needed surgery if he didn’t stop.

One day at rehearsal he said he couldn’t do it anymore. There was talk of seeking out a new singer until Ambrad stepped up to try and get them through the practice. His vocals surprised everyone and he very quickly adopted the new role. “We found our new lead singer and he was in the band the whole time,” said Orso.

The band has a rather unique way of producing albums. They write several, five-song EP’s each year and name them after different animals, adding the mark of Fuzz to the end.

Ambrad said, “When we started with Fox Fuzz we had a general idea where we wanted to go and what we wanted to do. By the time we finished that one and started writing Tiger we figured out the sound was completely different. So we thought, ‘Hey, why not do another animal?’”

So far the band has used: the fox, the tiger, the falcon, the cobra, the rhino, the gorilla and most recently the shark. Could Dolphin Fuzz be far off? “No,” says Corman, “it needs to be something toothier.”

The next question this reporter asked was about the possibility of releasing these albums on vinyl and the band all nodded and agreed in unison.

“We are all really into vinyl” said Ambrad, “and that’s something we really want.”

The problem all comes down to money, being that the band funds its own projects.

“We’ll probably need some back-up financing to do that properly,” said Orso, but the band told this reporter that the idea isn’t that far off. They think that by the time they reach 10 EP’s they could maybe put the collection into a small 10” box set containing five records with each animal to a side. That sounds amazing and I’m sure many of the Royal Fuzz tee-shirted fans last night would agree.

The band will be playing a show on June 24 in Waterloo at Maxwell’s where they will be opening for the Australian band The Lazys. After that they have another show in Waterloo on July 22 at the Starlight Lounge—this time it will be a CD release party for their upcoming album Mammoth Fuzz.

The band played a few songs from this new album at the Dakota show. Judging by the reaction of the crowd, I think it’s safe to say it will be a serious party. This reporter hopes to see you there and ready to rock.