There was a time when Canadian universities defended academic freedom with passion, authority and gravitas. Those days are over: hurt feelings and crocodile tears now trump free speech on our university campuses.

Here’s a pertinent example. Andrew Potter resigned last week as director of the Institute for the Study of Canada at McGill University, mere days after writing a critical column about Quebec in Maclean’s magazine. (He’ll stay on as an associate professor for the duration of his 3-year contract.)

His March 20 piece examined the recent snowstorm in Montreal, which caused a shutdown of a major route, Hwy. 13, and left 300 cars temporarily stranded. He depicted this “fiasco” as a “political scandal, marked by administrative laziness, weak leadership and a failure of communication.”

Potter said it was an example of “the essential malaise eating away at the foundations of Quebec society.” In his view, “Compared to the rest of the country, Quebec is an almost pathologically alienated and low-trust society, deficient in many of the most basic forms of social capital that other Canadians take for granted.”

For proof, he analyzed Statistics Canada’s 2013 General Social Survey. Quebecers ranked last, or near the bottom, in categories like civic engagement, trusting people and having close friendships.

“Quebec isn’t just at the lower end of a relatively narrow spectrum,” wrote Potter, but “rather, most of the country is bunched up, with Quebec as a significant outlier. At some point, charm and uniqueness betrays itself as serious dysfunction—and the famous joie de vivre starts to look like nihilism.”

The reaction from la belle province was anything other than, well, belle.

Many were furious at Potter, a former Ottawa Citizen editor-in-chief and Maclean’s columnist, for the less-than-cheery portrait he painted. Several were angry at the magazine, which famously called Quebec “the most corrupt province” in its Oct. 4, 2010, issue.

McGill kept a relatively low public profile during this brouhaha, save for a March 21 tweet: “The views expressed by @JAndrewPotter in the @MacleansMag article do not represent those of #McGill.” In private, the scuttlebutt was different. As Maclean’s reporter Michael Friscolanti noted, “Sources say McGill endured such intense backlash over Potter’s Maclean’s piece that the university left him only two choices: resign or be fired.”

On March 23, Potter officially resigned from, as he called it, “the dream job of a lifetime” due to “the ongoing negative reaction within the university community and the broader public to my column.”

It was a terrible moment for the talented columnist and editor—and a disgrace to one of Canada’s oldest institutions of higher learning.

Columnists tend to have strong opinions and engaging ideas. They write, speak, research and analyze particular areas of interest, and share their plethora of opinions in print, radio and TV. You can agree or disagree with them, but they should have the freedom to discuss their positions—and defend their views.

Potter has been doing this for years. He’s written thought-provoking columns and books on topics like political philosophy, pop culture and consumerism. Like all columnists, he’s not perfect: he apologized on his Facebook page for the Maclean’s column (before his resignation) due to “some rhetorical flourishes that go beyond what is warranted by either the facts or my own beliefs.”

It’s not like McGill didn’t know this about Potter. They must have realized he would continue to express opinions and the free exchange of ideas at the institute, albeit in different ways than column writing. As well, they should have defended his right to free speech, as an academic and as a human being.

Based on what happened, they either did nothing to help him or everything to bring him down. Whatever the case, it’s lodged a massive dagger in academic freedom at our universities that will be virtually impossible to remove.

Previous: Snowed under in a political Potter’s field
Next: The origin of April Fool’s Day 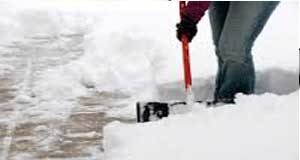 If it ever snows this winter, here’s what you must do