The origin of April Fool’s Day

Posted by: Bulletin Editor March 31, 2017 Comments Off on The origin of April Fool’s Day

On April Fool’s Day, we’re on red alert for pranks, hoaxes and fake news—and it’s been going on for centuries, from an era when court jesters were common.

With no TV, movies or Internet, jesters, jokers or fools were the entertainers of Medieval and Renaissance times. They often started out as travelling performers who, with minstrels, entertained at fairs and markets.April Fool

The fools who gained greatest prominence were those who entertained monarchs and noblemen, as part of the household staff.April Fool

Being a court jester was the career pinnacle for the quick-witted and talented few. They could rise above the simple nom 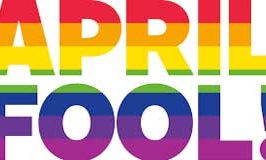 adic existence, entertaining peasants living in filth, disease and poverty. Their new life was to entertain a captive audience, and enjoy stability, shelter and more to eat in one meal than others had in a week.

No doubt everyone wanted to be a court jester but the supply of fools always exceeded the demand. There were no employment agencies or Monster.com. To get the attention of potential employers, jesters would take any opportunity to perform in front of the wealthy—not unlike what the paparazzi do to celebrities today.

Except you can’t behead a paparazzo, like what Henry VIII did to one fool on New Year’s Eve 1544. Despite being warned, this fool pushed the monarch too far just outside the Palace of Whitehall, in London.

That night, even the king’s personal jester, Will Sommers, couldn’t amuse the angry monarch. According to Sommer’s diary and stories passed down over the centuries, the evening was marred by drunken rants by Henry. The king even threatened to cast away the ships of fools or behead them all.

Sommers had been in service to the king for years and had become his friend and confidante. At the risk of his job, and perhaps his life, he tried to convince the king that serial execution of fools wasn’t a good idea.

Coming from a family of fools, perhaps Sommers made the appeal for selfish reasons. He attempted to convince the king that he needed to laugh, that all people need to laugh in tough times. Henry had just buried yet another wife, Catherine of Aragon, so his temperament was certainly suspect.

Failing to make an impression, Sommers then reminded the king of how they first met and how he had made a life-changing impression on his majesty. That made Henry smile.

With the tension gone, Sommers confessed he had concerns about his own health. He suggested that Henry audition other fools in search of a replacement, instead for waiting for his demise – either by natural causes or beheading (the ultimate job dismissal). If the King so wished, Sommers could arrange a trial performance at his majesty’s pleasure to “appraise the entertainer’s merit.”

Henry put Sommers in charge of the auditions and requested they take place immediately upon his return from a trip to Versailles – on April 1.

The event was an overwhelming success. Henry had never laughed so hard—and he found a successor to Sommers.

As a result, he decreed April 1 to be the “annual Night of Fools.” The king would only enjoy a few of these since he died in 1547, three years later.

Sommers outlived his master, in turn entertaining Elizabeth I until his death in 1560.

And the Day of Fools tradition lived on, although it gained a new name in 1582, when it became known as April Fool’s Day. The name was changed to conform with the Gregorian calendar introduced by Pope Gregory XIII that year.

Now, people work hard in search of more creative ways to get others to believe something that’s not really true, like this story.

— Greg Gazin The Gadget Guy and Gadget Greg, is a syndicated veteran tech columnist, small business and technology speaker, blogger, podcaster and author. Reach him @gadgetgreg or at GadgetGuy.ca.