Pancakes & Booze: neither of which have anything to do with art

Posted by: Bulletin News May 1, 2016 Comments Off on Pancakes & Booze: neither of which have anything to do with art 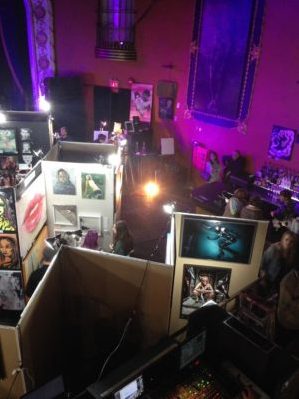 On the night of April 23rd, the internationally known Pancakes & Booze Art Show held one of it’s many events in Toronto’s illustrious Opera House just east of Broadview on Queen Street. The Pancakes & Booze Art Show has made a name worldwide by doing events in places like Los Angeles, New York, Berlin, Paris, Melbourne, and even Honolulu, Hawaii. It is known and praised for its ability to give upstart artists a platform and of course, free pancakes and booze. But the question of whether or not they have made a name for themselves in the realm of art selling and career creating still remains a mystery. 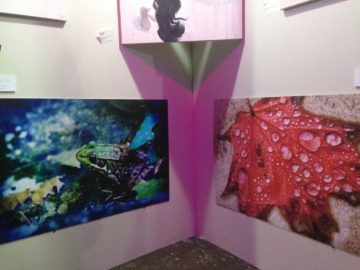 The fact of the matter is that in the generation that we are living in, art buying is no longer exercised as much as it was before, nor is it done with the same amount of expertise and heralded prestige. What especially makes it difficult is that the connoisseurs of art are no longer just the wealthy aristocrats with the purchasing power necessary to indulge in refined creative expressions. Today’s non-artists who claim to be “connoisseurs” are the same ones who employ Pancakes & Booze’s main demographic: 20 to 30 something, lower to middle class, urban youth. They have an appetite for pancakes and a general thirst for inebriation but one thing many of them do not have, is the money needed to experience the spoils of buying art. This is why the world of art gallery viewings are flooded with gimmicks and incentives and as sad as it may seem, can you blame them?

Due to the convenience of the internet, the world of visual art purchasing has pretty much been pushed to the web. Although one of the last industries to finally make the move to the digitized world, it has clearly settled in comfortably. This is mainly due to the fact that the internet boasts an international audience while a gallery is usually just viewable to the inhabitants of that area. 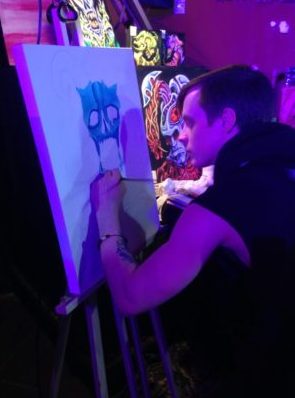 In 2013, Rebecca Wilson, Director of Saatchi Gallery in the UK claimed she makes more online in a month than most galleries do in a year. The online art market is growing at an estimated rate of 20% per year says BBC. Market research company ArtTactic projects the value of the online art market to more than double to 3.76 billion in the next 5 years. All this while gallery sales remain stagnant, especially for the most active generation swimming throughout Toronto’s art scene: the youth. ArtTactic’s report found that 25% of 20 to 30 year olds said they first bought art online and 39% said it seemed less intimidating than galleries. These numbers will only continue to rise as long as we remain in a world where vendors and galleries are forced to rely on clever marketing tactics to bring attention to their gallery.

Not only is this lack of monetary support from peers forcing art shows to get creative with their events, its forcing artists to get more creative as well. As the spotlight gets dimmer, as visual artists are getting less and less shine, this urge to create a name for yourself in this business becomes more difficult. This ends up pushing the boundaries of creativity for artists all battling for the pinnacle of personal achievement: recognition.
This became especially evident when measuring the progression in mediums at this years Pancakes & Booze event in comparison to last years. When thinking of visual art, the main mediums that come to mind are ceramics, drawings, paintings, prints, crafts, sculptures, and photos; all of which were present at last year’s event. However, the push for a stronger sense of creativity has brought out innovative mediums, displays, and designs that may be seldom seen even to some of the most well-versed art enthusiasts this year.

An example of this is Toronto native Tristan Drysdale who begun his art piece as a learning tool for children, but soon became engrossed in making it impeccably accurate to his vision and ended up creating about a 24″ by 36″ mini model of an entire city, made mostly with random things you’d find around the house. Then there’s the guys at Glitch Artwork who recreate scenes from our favourite golden age video 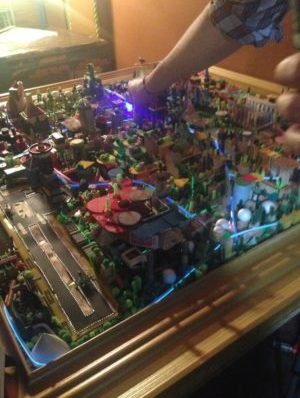 games in a style of 3D shadowbox printing they’ve invented themselves which uses foam-core board as opposed to paper or card. Kristian Gutauskas of Kreation Kreated Arts, another young artist at the event, chose to utilize a unique marketing angle to push his sales past those of his peers. He used the common exercise of live painting to create a whole new channel of sales flow and put a higher sense of value on his art by allowing all the prints he had for sale to also double as raffle tickets, which would allow one winner to go home with the painting that was being made right in front of their eyes. The ingenuity of these angles display the progressive direction artists worldwide are now forced to move towards.

This is why even though events like these may seem to put the art itself on the back-burner of its focus, events like these are still necessary for keeping art alive in a rapidly changing industry and market where in reality; it is on the back-burner. This is why it is up to us, the consumers, users, and viewers of art to continue supporting with our time, energy, and pockets. We are all very grateful for artists and vendors like Pancakes & Booze, so its time to show it.