The very real dangers of overwork

Posted by: Bulletin Editor December 31, 2016 Comments Off on The very real dangers of overwork 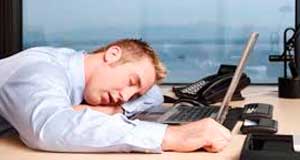 The big successes of the world aren’t clock watchers.  They’ve turned their back on the conventional 9 to 5 mentality, and work 12- to 14-hour days and put in Saturdays—even Sundays—when they have to.

But the seldom-discussed flipside is that while hard work and long hours can certainly pay off, after working past a certain point the quality of work diminishes, taking a heavy mental, emotional and physical toll. Eventually, it can diminish the quality of your life.overwork danger

There is real truth to the saying, “All work and no play makes Jack a dull boy.” Simply, without a break from work, people become bored and boring because they have no outside interests.overwork danger

But companies have never heeded that tired saying. Most of the decision-makers of the bastions of capitalism strongly believe that working their top employees really hard produces stunning results and that it’s an opportunity for superstars and innovators to emerge from the wings and prove their worth.

But countless experiments over the years have proven that working too many hours decreases productivity. You’re wearing yourself down emotionally and physically and increasing the chances of burning out. Equally important, consistently working long hours also leads to sleep deprivation, which produces symptoms comparable to being legally drunk.overwork danger

Companies that encourage their employees to work ungodly hours wind up paying for it in the long run. No matter how tough, strong and resilient you think you are, you’re not a machine. Not only can you not work around the clock; you also can’t put in a sustained work routine of 12- and 14-hour days five and often six days a week.

Human beings have always overworked themselves. It’s a function of human nature, not a function of the times. Today, however, there are new reasons for working long hours. Thanks to technology, not only are you furthering your career and building a solid nest egg, but working long hours is easy to pull off. Neat and sophisticated gadgets have made it painless.  All you need is good technology – a computer or smart phone and you can be available and on the job 24-7.

However, while the physical drudgery is removed, there is a subtle emotional and psychological drain, which is not evident at first. In time, it’s more debilitating than physical exertion. There’s a limit to how much we can push ourselves physically, yet our emotional endurance can be pushed a lot further. But it’s only a matter of time before our entire system breaks down and there is a serious loss of efficiency.

Studies drive home the dangers of overwork. Here we are in 2016, and we’re just discovering what Henry Ford learned in the mid-1920s. Overwork can be costly, dangerous, inefficient and expensive. After conducting experiments for 12 years, he learned that by cutting the workday from 10 hours to eight and the workweek from six days to five, he could increase total worker output and reduce production costs.

While Ford took credit for the 40-hour workweek, he was not the first to come to the conclusion that it was worthwhile. Throughout the 30s, 40s and 50s, there were hundreds of studies praising the benefits of the 40-hour week.

All human beings are different. Some require more sleep and downtime than others. It’s up to you to determine when you’re at your best. At what point do you peak and begin to lose effectiveness?  Knowing these personal details can help you gauge how many extra hours you’re capable of giving to special projects.

Working smart means understanding your limits. You’re no good to anyone, least of all yourself if you’re not in top mental and physical condition. Find out what it takes to get there. Doctors and fitness experts constantly preach the importance of leading a balanced life. That translates to eating sensibly and getting enough rest. Our capacities for food are different, and we all require different amounts of sleep in order to feel fully rested.  You have to find out what it takes to get that balance. It’s not going to be easy, but it’s worth the effort.

Previous: 7 players who might take NHL Calder trophy
Next: 2016 was the year of elite comeuppance