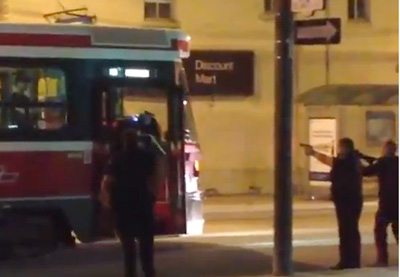 Blasting away at a young man with a knife on an empty streetcar.

The Ontario Federation of Labour (OFL) responded to news that Constable James Forcillo will be charged with second degree murder in the shooting death of Toronto teen Sammy Yatim by saying that justice won’t be satisfied until there is full accountability for the police response.

“Laying murder charges against Constable Forcillo is only the beginning of the justice process, it isn’t the end,” said OFL President Sid Ryan. “We cannot continue to treat each police shooting as an anomaly while the bodies are piling up. Sammy Yatim was not just killed when Constable Forcillo opened fire, he was killed by a police response that failed him at every level. Real justice requires full accountability and substantial reform of Ontario’s entire policing system.”

Questions about the police response to crisis incidents were raised when the news broke on July 27 that 18-year-old Sammy Yatim had been shot dead and tasered on an empty Toronto streetcar. The entire incident was caught on video and sparked public outrage over the excessive use of force. The OFL responded by demanding an independent investigation into police training, policies and practices from the highest levels of decision-making right down to the front line response.

“Sammy’s family and the families of every other victim of a police shooting deserve more answers than SIU charges against one officer can deliver,” said OFL Executive Vice-President Irwin Nanda. “Who was in charge of the scene on that fatal night? Why didn’t officers try to de-escalate the situation before responding with deadly force? Why wasn’t the Mobile Crisis Unit called in? Why isn’t the officer who tasered Sammy after he was shot being investigated? What charges will be laid against the officers seen on video tampering with the crime scene by kicking away bullet cartridges? All of these questions allude to a systemic problem with the entire police response.”

The OFL believes that the tragic death of Sammy Yatim shares many common details with the dozen other people in mental crisis who have been shot by Toronto police over the past twenty years. It says that it is time for the Attorney General of Ontario to impose uniform guidelines across the province that require any police response to focus on de-escalating tensions, diffuse confrontation and save lives.

“We are hoping that this murder charge will send a message to police that they cannot shoot first and ask questions later, but we can only prevent other unnecessary deaths if we indict the system that created the conditions that allowed this tragedy to happen,” said Ryan.

2013-08-19
Bulletin Editor
Previous: Downtown Toyota Back To School Sales Event
Next: Jack Layton to be remembered with sculpture and renaming of Toronto’s ferry docks