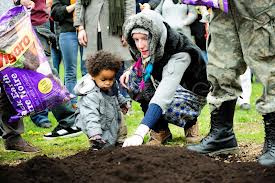 FOOD IS LIFE; NOT A COMMODITY – May 1, 2013 marks the 1 year anniversary of the planting of the People’s Peas Garden. The People’s Peas Garden was planted as part of the 2012 May Day festivities in SOILidarity with food workers and eaters around the world and was destroyed by the City of Toronto 5 months later on the eve of harvest. We will mark this occasion by planting a new community garden to call attention to the continued hypocrisy of the Canadian government on every level as they promise to eradicate hunger while actively perpetuating a food system based on the comodification of life and maximum profits for agro-business. This is part of a world-wide movement against a globalized colonial capitalist state-corporate food regime that encourages the destruction of livelihoods, displacement of peoples and the devastation of the natural environment.