The annual Who’s Hungry report reveals people 45 and older have become the fastest growing demographic using food banks in Toronto. This is an outcome of unaffordable housing, rising costs of food and insufficient incomes. Many of these individuals have been struggling since the recession, unable to secure a job or living with disabilities, and having to rely on social assistance.

“In 2006, 26 per cent of clients were 45 and older, that number has climbed to 35 per cent in 2016,” said Richard Matern, senior manager of research and author of the report. “On the other hand, fewer children are now accessing Toronto food banks, and with the implementation of the federal Canadian Child Benefit, we are hoping this trend continues.”

The Who’s Hungry: 2016 Profile of Hunger in Toronto report was released today, based on over 1,000 comprehensive, face-to-face client interviews in 36 food banks across Toronto. Limited job prospects in Toronto means many people on social assistance programs – Ontario Works and Ontario Disability Support Program – are left struggling to fight hunger and poverty. The basic income pilot project, soon to be outlined in a report being released by the provincial government and led by former Conservative senator Hugh Segal, can provide the evidence needed to transform the income security support system in Ontario.

“We have made strides in social policy with the municipal, provincial and federal government, but hunger and poverty are multifaceted issues that will require continued efforts,” said Gail Nyberg, executive director, Daily Bread Food Bank. “We need a social safety net that better supports people in a fragmented labour market. A constant advocacy for change, and continued support from partners, donors and volunteers will bring us closer to reducing poverty, and its symptom, hunger.”

Other notable findings from the Who’s Hungry: 2016 Profile of Hunger in Toronto report:

For more information, or to download a copy of the Who’s Hungry report, please go to www.dailybread.ca. 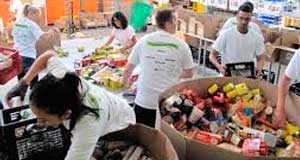