Posted by: Bulletin News February 27, 2014 Comments Off on Notorious Family Compact was a despised ruling elite

I’ve always had a fascination with parking lots, especially in the Downtown core where you can bet that long before the automobile was invented there was something much more interesting there.

For example on the southeast corner of Richmond and Victoria there’s a lot that was once the site of the massive 2000-seat Shea’s Victoria Theatre (c1910-1958), the lot on the northwest corner of Church and Court streets was formerly the site of the first fire station in Toronto (1826-1874) and on the east side of Berkeley just south of Front was maybe the most historic parking lot of all: the First Parliament site (1798-c1824).

Another parking lot in Toronto with deep historical roots is on the  west side of Church between Colborne and King streets at one time the site of Cooper’s Inn, a very popular drinking establishment with the ruling elite, the Family Compact (FC), when it was first built in 1825 by William Cooper.

In 1836 the inn was taken over by a James Bell (no relation), a staunch conservative Tory who renamed it The Sir Francis Bond Head Inn after the new Lieutenant Governor of Upper Canada. At first Sir Francis, a former cavalry officer who had fought beside Wellington at Waterloo, was willing to listen to reformers like William Lyon Mackenzie. And they in turn were happy to have Sir Francis as lieutenant governor because his predecessor Sir John Colborne (after which the street is named) was a member of the much despised FC ruling elite. 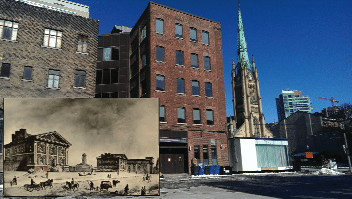 Many Downtown parking lots have been the scene of dramatic historic events.

However, Sir Francis stopped listening to the reformers and started to side with the FC after realizing it was they who could give him what he really wanted: power.

In order to keep in the good books with the FC Sir Francis called an election after dissolving the assembly and just to ensure victory for Tories, the FC party of choice, he decreed that only men who owned property could vote.

Back then you had to be a white male of British birth to have a vote, so in effect the few farmers who merely rented their land were left out. Immediately Sir Francis issued hundreds of land deeds, handing them out along with free booze at his namesake Inn to anybody who would vote Tory.

To everyday people, that one act of disgusting largesse was to be a turning point.

Soon whispers of a rebellion began to seep out from the taverns, hotels and coffee shops that once lined our streets with the loudest murmur coming from inside the Mackenzie camp. Supporters of Sir Francis Bond Head not really bothered by what the rabble had to say answered those whispers by painting the words “Let them come if they dare!” below the swinging sign portrait of Sir Francis outside the inn. Beginning at nightfall on Dec. 5, 1837 the McGraw Troupe—the infamous government-backed fighting force—rode en masse down Church Street to the Inn, stabled their horses in the barn behind and downed a few pints while they made their plans for the following day.

The next morning the Troupe galloped down Colborne Street and went on to meet up with Sir Francis and his 1000 volunteers.

The two armies met about a half a mile below present-day Eglinton Avenue where Sir Francis set off his booming cannons, which sent Mackenzie and his 150 men running back to their headquarters at Montgomery Tavern just north of Eglinton on Yonge.

Mackenzie, knowing all was lost, escaped to the United States and 12 of his of his supporters—including Samuel Lount and Peter Matthews—were hanged on a scaffold erected across the street from the Sir Francis Bond Head Inn.

The rest were either exiled to Australia or were allowed to stay here if they behaved with no more of that ridiculous democracy talk.

It would be another decade until “responsible government” was enacted, thus creating the Canada we would come to know where the people and not its leaders would be in charge.

In the years that followed the Sir Francis Bond Head Inn was passed on to George Allen who simplified its name to the Head Inn.

For the next few decades the inn, now fully encased in Tory folklore, became the favorite watering hole for men attending the annual Orange Walk held every July 12 to celebrate the Battle of the Boyne when England’s Protestant King William of Orange defeated the forces of Ireland’s Catholic King James in 1690.

In its final years John Irwin, an alderman, kept the Inn going before it was finally demolished in 1872.

In 1875 the elegant Bon Accord Building a substantial 4-storey Victorian office building that housed a doctor’s practice, a wine merchant and the office of the chief of police went up in its place.

The parking lot that occupies the site today came into existence in the 1960s when the Bon Accord came crashing down as part of Urban Renewal.

The area has maintained its historic Tory roots to this day with the arrival of the Albany Club in 1889 when they moved their headquarters from Bay Street to 35 Colborne St., just behind the King Edward Hotel.

In 1898 this bastion of conservatism of which Sir John A. was a member moved to its present location at 91 King St. E. backing onto the original land once owned by William Cooper.

However, the parking lot and the entire block surrounded by King, Colborne, Church and Leader Lane is about to disappear with the planned construction of a pair of massive condos that will have almost as many residents as the Town of York did when Cooper’s tavern stood there almost 200 years ago.