Posted by: Bulletin Editor December 11, 2013 Comments Off on ‘No condos’ for once-glamourous Sherbourne Street, says councillor

230 Sherbourne St.—also known as the “William Dineen House”—was built when Canada was only five years old. Heritage Preservation Services describes the property as, “a well crafted example of a house form building of the style and type popular in the late 19th century.”

The building housed William Dineen, co-founder of the prominent W. and D. Dineen Company (furriers and clothiers) for almost 40 years. Dineen sold fur coats, capes, and gloves. The businessman was described as, “a pioneer of the business life of Toronto and one of its best known citizens.” The architects who designed the residence’s alterations Langley and Langley were prominent in Toronto as well.

The neighbourhood surrounding it is not what it once was. Sherbourne St. was at one time an exclusive residential enclave; a place reserved for the city’s elite. Now, the Dineen House looms over a neighbourhood of shawarma restaurants, corner stores and decaying shops.

The Queen Anne Revival building is also not what it once was. The building, once a powerful crimson red, is now fading. Large windows that invited light into the foyer are now blocked by layers of plywood.

In the past, the property was used as a rooming house for low-income tenants. Now it stands vacant. In July 2011, the building’s absentee landlord applied to demolish the property to build condominiums: that application was soon withdrawn. The building was given heritage status that year.

“Right now that building unfortunately is boarded up and deteriorating and could be, if the state continues, lost forever,” says Jamie MacLean vice-chair of the nearby Cabbagetown Heritage Conservation District Advisory Committee.

Ensuring that the Dineen House is not lost forever is most peoples’ objective. Figuring out what it should be used for is another objective entirely.

On Sept. 22, members of the Ontario Coalition Against Poverty marched to 230 Sherbourne and occupied the building in a sign of protest. Eventually, the police arrived. The group then made its way to city hall. 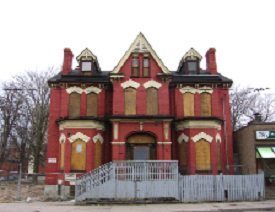 The William Dineen House as shown in a Heritage Preservation Services photo from 2011.

OCAP wants the city to expropriate the land and transform the house and its lots into social housing, a project that would be named after Drina Joubert, a homeless woman who was found frozen to death behind 230 Sherbourne in 1985.

The organization insists that the property should serve a neighbourhood plagued by homelessness and experiencing rapid gentrification by condominium developers. In April, city officials said that Toronto’s shelter system is 96% full on an average night.

“So at the same time that the shelters are overflowing and that there’s a serious lack of affordable and accessible housing, there’s a very nice building sitting at the corner and sitting empty,” says OCAP organizer Liisa Schofield. “Enough is enough.”

Nevertheless, some Sherbourne St. residents are concerned about adding a shelter to their community. They say a social housing project at the Dineen House could make the area more dangerous than it already is.

Roomates Morgan George and Brandon MacLeod have lived in the apartment complex across the street from 230 Sherbourne for almost two years. When they moved in they noticed what they describe as a “beautiful old house.”

Since their arrival they have seen no activity on the part of the owner. For them, the building is now a “squatting house”—they’ve heard that homeless people have broken into the property to sleep.

MacLeod describes his neighbourhood as a place where residents keep their heads down to avoid harassment from the homeless. George says his girlfriend has been verbally abused.

“I don’t think low income housing is what Sherbourne needs right now,” says MacLeod. “I think it needs polishing up.”

George says there are already too many shelters in his neighbourhood. He says he would like to see the building become a regular apartment.

“I would dead serious move into that house,” says George. “If there was a two bedroom apartment upstairs I would move in there.”

Kristyn Wong-Tam is the councillor for Toronto Centre-Rosedale, where the Dineen House is located. As a politician she must grapple with the beliefs of these two parties. Wong-Tam says she has previously asked the property owner to make use of the residence, but he has not been co-operative. One thing she says she will not permit is for the property to be used for condominiums.

“I do not want that property torn down,” she says. “I’m not interested in seeing condominiums on that site in particular, because I think that we can do better than building high-rise condominiums and not advocating for more affordable housing.”

Her answer to OCAP’s demands to expropriate is that the actions do not fall within the city’s job description—to lay the groundwork and create conditions that allow for mixed use communities to form. She adds that the process is complex and expensive. The city would have to pay market value for the property after a lengthy long-term plan and legal battle.

Wong-Tam insists Torontonians must understand that the city is the only service provider that “continues to stay at the table” when it comes to solving homeless problem fed by those travelling from across the country and province and settling in the city’s Downtown east.

“We are not being supported by our other orders of government,” says Wong-Tam.

2013-12-11
Bulletin Editor
Previous: Would they get less jail time for murder than tax crime?
Next: Richmond-Adelaide cycle project to hit the streets next summer