Posted by: Bulletin Editor August 20, 2014 Comments Off on Militarized police pose a monsterous threat to democracy

Consider this a wake-up for Canadians whose federal government is closely following U.S. trends and went to war both in Afghanistan and in Libya. People were slaughtered in those lands by our military forces and both those devastated nations are now much worse off than they were before the U.S. started a war with each. The U.S. has become an outright police state and Canada must not follow. — FT

As a former big-city mayor of a racially diverse city, Cleveland, Ohio, I can understand the cross currents sweeping through Ferguson, Missouri. A former U.S. Congressman, [Kucinich was considered too liberal by the powers in Washington DC and was voted out in Ohio, which he represented.]

We are at a moment of national crisis in the way our domestic law enforcement is being conducted. The killing of an unarmed civilian by a law enforcement officer is, sadly, not unique. But the police response to the protests has provided a powerful cautionary moment for America. The militarization of local police has led to the arrival today in Ferguson of the actual military, the National Guard.

This crisis comes from:

1) The erosion of a principle in federal law, Posse Comitatus, meant to restrict the use of the military in civilian law enforcement;
2) The Pentagon’s dispersal of military equipment to domestic police units, which has increased since 9/11;
3) Military-style police training reliant upon weaponry, as opposed to peace keeping, including skills development for de-escalation of violent tensions.

An unarmed, African-American teenager was shot and killed by a policeman. As people protested, the Ferguson police response evoked images of an occupying army come home.

Sir Robert Peel was the founder of modern policing. He developed the Peelian Principles that specify ethical requirements police officers must follow to be effective. They remain the basis of modern policing and we lose rights and freedoms when they are abandoned. 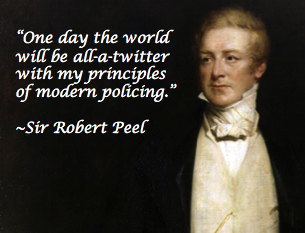 The show of military-style force in an American city has created a huge backlash because the underlying concerns for justice have not been addressed. Moreover, Americans don’t want armies patrolling their streets, attempting to stifle public dissent.

There is something deep in the American psyche which resents and resists military-style force in our neighborhoods. The hard-edged military pose of armored vehicles, heavy duty weaponry, and sound cannons, which can permanently damage hearing, may seem like modern crowd control to some law enforcement officials. But to the people in the community who are on the receiving end, it is an escalation of violence, in real terms and by the law.

The Boston Massacre of March 5, 1770, was a catalyst toward the American Revolution. Five civilians were killed by the British soldiers. The Declaration of Independence, in condemning the offenses against liberty by George III, stated:

He has kept among us, in times of peace, standing armies without the consent of our legislature.

He has affected to render the military independent of and superior to civil power.

He has combined with others to subject us to a jurisdiction foreign to our constitution, and unacknowledged by our laws; giving his assent to their acts of pretended legislation:

From our earliest beginnings, when John Adams spoke to “the dangers of standing armies,” Americans have demanded accountability and rejected military presence in our daily lives.

Yet, for purposes of security, the Framers provided Congress with the power “To provide for calling forth the militia to execute the Laws of the Union, suppress insurrections and repel invasions.”

The invocation of that provision has a checkered history: The Army has been involved in enforcing slavery, strike-breaking, and interfering in the 1876 Hayes-Tilden election in the South.

Rutherford B. Hayes, a Republican, became president in a deal, “The Compromise of 1876,” which led to federal troops being removed from the former Confederate states in the south, ending Reconstruction and dashing the hopes of African Americans for full civil rights.

Eighty years later the federal government would attempt to acquit itself of that sell-out by using a federalized national guard to challenge segregation, enforcing African-American students’ rights to attend public schools in Little Rock, Arkansas.

In 1877 a law was passed which forbade the use of federal military resources in domestic law enforcement in any manner. The proscription, popularly known as Posse Comitatus, held up for more than a century.

In the past two decades the United States Congress began to chip away at the firewall between democratic policing and militarization, passing legislation authorizing the Department of Defense to give local police information on military training, and to provide equipment and facilities.

Local police departments became the recipients of military-grade weaponry, guns, tanks, armor, planes and the like. With the military equipment came the mind-set of police becoming warfighters, in a hostile environment — in one’s own community.

As Americans become aroused over social, economic and political conditions which speak to the failure of government to protect the civil rights of all people and the failure to address the practical aspirations of the American people, this is the time to demand Congress understand the significance of the Declaration when it comes to protecting our freedoms in the 21st century.

Here are some suggestions:

1. Congress must firmly re-establish the firewall between civilian law enforcement and the military by reinstating the intent of the Posse Comitatus law. As member of Congress I warned in 2007 the dangers of a bill which permitted the government to put troops on the ground in the US.

2. The Department of Defense must stop providing war-fighting equipment to local law enforcement.

3. All equipment provided to local law enforcement by the Department of Defense, must be inventoried and stored, not used except under an executive order from the top civilian authority in a state, the Governor, or under orders of the President of the United States.

4. The General Accounting Office and the Inspector General of the Department of Defense must be asked by Congress to determine the extent to which the training and equipping of local police by the DOD has created a culture in local law enforcement which is adverse to democratic values.

5. The Justice Department needs to fund programs which will train or retrain local law enforcement in racial sensitivity, constitutional protections of suspects, including the right to freedom of speech and right to assemble.

6. The Justice Department must also fund, support and mandate that all local law enforcement receiving any federal funds whatsoever create community programs for dialogue between local police and people in the neighborhood. Local police become an occupying army through emotional distancing, fear and lack of contact with the community. That can change by having police and the community meet regularly to discuss mutual concerns.

Those who serve in local law enforcement are given special trust, special dispensation to serve and protect. Their work is essential. Local police would like to be supported. But we must demand strict adherence to the Constitution and protection of the freedoms given to us by the Bill of Rights.

Let’s insist on the following principles:

The requirements of freedom demand no less.

Kucinich published the above article in The Huffington Post