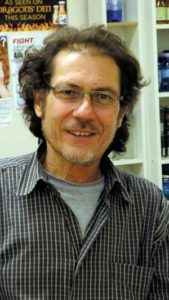 When I first met Michael Granat it was at the North St. Lawrence Market where he had started a health-food store, Vital Planet. I was a customer, but also a supplier. I was selling ads in the St. Lawrence Neighbourhood Community Bulletin, precursor to The Bulletin where you are reading this on our website.

Michael is a lawyer by training and a bachelor domiciled in Hamilton. In those days he couldn’t seem to see the value in promoting his business in a community newspaper.

He was a tough sell.

He was always his own man. Independent. Opinionated. Informed.

Now, many years later, his business is on Lower Jarvis and has expanded into such health-related items as bongs and paraphernalia for those who have (it’s presumed) prescriptions for medical marijuana.

Michael is an infectious personality who loves to laugh and sees humour in most aspects of our earthly existence.

Thus he has penned—if that’s the word—his second novel: To Cuba for Love. His first, The Selling Party, whetted his appetite to write more.

Like the first novel, his second is, as is his wont, serendipitous and self-analytical in a Woody Allen-esque manner with much Jewish schtick.

Here is how it starts:

What’s funny is that I never thought about it at the time.  Then, I was just there.  The music filled my mind emptied by the beers, rum and coke.  I was feeling at home in the club on a warm tropical night, in a country I had come to and been in so often.  During the trip, I thought other things would stand out in my memory, like the hassles with Immigration and Customs which caused me to miss my bus to the hotel, but it was a merely a motion, the simple act of touching (done unconsciously as if I were on auto pilot and still observing) that I recalled upon my return.  The action had already occurred, but my recollection of the experience was brand new.  I never pondered on the act while doing it.  I was too entranced in, “Oh what a feeling!”  My hands stroking Junia’s bare shoulders and arms, rhythmically rubbing and pressing into her silky brown skin, messaging their way from the back of her neck to the tips of her fingers, raking in all the pleasure they could, as if propelled by a spell.  Their repeated glides were the key for me to unlock the gate of her fertile garden; a “hello” to her silent siren song calling out:  “come on, come on, come on and touch me babe – I am not afraid!

My arms draped over her from behind.  I drew her in close.  I imagined her purring in catlike contentment.  Then, she would turn and strike with a smile full of white magnetic teeth and kiss me; her tongue prying open my lips.  How could I help but be played by a tune from beyond time, rhyme or reason?  She commanded my primal defenses to fall.  The space between us had been squeezed empty of air, filled by my swollen desire grown hard and strong!

But didn’t she tell me that her name was “Julia”?  Why else would I have sung the song, “Ju-li-a, Ju-li-a…” at the time?   And I believed it to be her name until she told me on a subsequent trip that her name was “Junia” – after I saw “Junia” written on her carnet or national identity card.

I confronted her with the fact as soon as I found out.

“You must have written it down wrong,” she said when asked about the discrepancy.

“I said nothing in reply, but I was certain she had written her name as “Julia” in blue ink on a piece of paper torn from a package of Hollywood Blue cigarettes outside the club that hot humid night as we sat close to each other, side by side, on a low stone wall with our backs to calm Cienfuegos Bay, facing the entrance to Club Art X across the road littered with Ladas, motorinas, bici-taxis and other vehicles, some of which were small cars referred to as “shit” in Russian, according to a joke.

I was very wary of such things:  who was who and what they were called.  It was not my first time in Cuba!  I had been a lawyer for many years where doubt and suspicion were bred to the pith of my substance and filled the marrow in my bones, although some twenty years had passed since I last engaged in the arcane practice of law.  But I had kept the evidence all along, a little piece of paper with “Julia” clearly written in her steady, even if drunken hand, followed by a phone number – the number which I subsequently called to get in touch with her!

Had I not vowed not to get fooled again?  Was I too drunk to realize that forgetfulness of life’s lessons could be an excuse to do whatever one wants, even if it is not in their best interests in the long run?  But the insidious intent of alcohol thinned the cord tying me to memories of the past.  With elongated strands I was bow-tied in knots of love (or lust – it’s so hard to tell the difference sometimes) cutting off the blood flow which would have brought “lessons learned” to mind.  My heart however, beat only in the present, the gift presented, the here and now, which to me then was my oneness of just being, and feeling, there.

You can wait for the printed book version to come out and purchase it from Amazon (or from Vital Planet Health Food Store, 53 Lower Jarvis St., or you can start right in with an ebook version by emailing michaelgranat@hotmail.com.

You will likely be at least somewhat outraged and definitely entertained.

Previous: Increased ‘street nuisances’ trigger Cabbagetown South meeting
Next: How do we break the pattern of racial and sexual discrimination?