Mainstream media toe the government line even in Canada

Posted by: Bulletin Editor January 18, 2015 Comments Off on Mainstream media toe the government line even in Canada

We’ve all heard the complaints about the “mainstream media” in the U.S. twisting their reportage to reflect the government’s positions on various events. I’ve always taken it for granted that Toronto’s mainstream media doesn’t do that. Certainly not in a city with four daily newspapers served by a bulging bullpen of the best and most sophisticated writers and editors in the world.

My chagrin was triggered when Russia understandably annexed Crimea. That was following a large majority vote in the historically Russian all-weather seaport that Stalin had assigned to Ukraine when it was no more Ukrainian than Moscow was and is. It was all Soviet Union back then. Ukraine, by the way, was invented by the German general staff prior to World War I in order to provide Germany a supply of wheat and eggs in the anticipated boycotts, barricades and battles to come.

The four Toronto dailies and their cohorts around our nation leapt to support Prime Minister Stephen Harper and his U.S.-inspired vision of America’s war machine NATO ruling the world and posting missiles on Ukrainian ground boldly targeting adjacent Russia.

I was shocked at how knee-jerk their editorial responses were. It makes one wonder whether it’s their corporate masters or some federal hanky-panky at play such as not designating them “traitors,” or maybe more advertising revenue or tax-break offers. The Harper regime spends countless millions of our tax dollars advertising itself to Canadians.

The Ukrainian situation is vastly different than we are reading in our media. That is, if you do what most people don’t do and seek credible alternative explanations on the Internet. That’s especially important to do soon on the off-chance that the Internet will be censored in the cause of fighting “terrorism” if Canada follows the U.S. route and becomes a police state as America surely is.

You aren’t to be blamed for not doing that. It requires researching and finding credible critics and authoritative sources.

So in that regard, I can help. I’ve been researching alternative viewpoints that don’t make the mainstream media and observations by informed academics, journalists, researchers and investigators.

There are many on the Internet, which so far is the most readily available source of complementary opinions that wander different paths than any the

mainstream trod. For audio and video commentary from all these, just search them on the Internet. They are all prolific, authoritative and informative.

For a good historical perspective and compelling current commentary on world events there is Webster Griffin Tarpley (www.tarpley.net), a PhD

historian who speaks a number of languages, travels often from his base in Washington D.C. and is a passionate progressive. His weekly World Crisis Radio report is not to be missed.

Another savvy historian and economist is Paul Craig Roberts, PhD, former Assistant Secretary of the Treasury under Pres. Ronald Reagan, a former associate editor of the Wall Street Journal (www.paulcraigroberts.org) and a devastating critic of U.S. hegemony and military-financial tyranny. 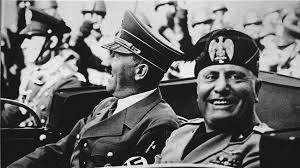 from an historic building in Kingston, N.Y., dances the boogie at the drop of a whim and tells the truth about “white-shoe-boy” bankers and big-wigs, as do the others. Only Gerald tells it  funnier.

Gerald tells the very unfunny tale of the ghost who is running the Harper government and most other Western allies: Benito Mussolini. He invented the term fascism which, as Gerald relates, means the merger of government and corporate power. Sounds like Canada, dont’cha think?

The most controversial yet intensively well-researched and authoritative film-maker/commentator of the U.S./British-based one-world tyranny is the unlovely Alex Jones (www.infowars.com). He has been at it for a couple of decades, has learned from his many mistakes and has come close to perfecting an alternative news operation that sniffs out the lies and deceptions of our rulers and mercilessly exposes them in front of an audience of scores of millions of listeners and viewers.

Waning CNN and Fox News must envy that success.

Alex is probably the world’s worst interviewer. A phone call from a listener is like a Rorschach slide for Alex who flies off in whatever mental direction it takes him, leaving most call-in listeners tongue-tied as Alex rants on, triggered by the first few words from the caller. 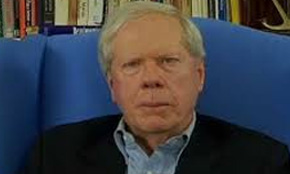 Rants are a key element of Alex’s teaching style. He can ramble furiously in whatever direction a keyword moves him until he runs out of breath or has lost the thread or has just had enough. “I’m ranting,” he declares, and moves on to another caller or another theme.

He is a skilled filmmaker, has a staff of skilled filmmakers, and is a threat to the “new world order” that the first bad Bush president threatened us with in a thousand-points-of-lights message that triggered images of Satanism.

That latter philosophy, by the way, is what Alex thinks drives the national elites and New World Order creeps who meet in a California woods that Alex infiltrated, recorded segments of and reported on in great, frightening detail, including the image of an owl they seemed to worship.

You’ll have to put up with his pitches for vitamin supplements and various nostrums Alex peddles to help finance his increasingly costly operation. 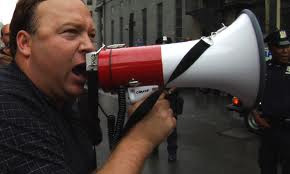 Needless to say he’s so controversial that, despite his massive audience, there are few major advertisers who would appear on his website and various Internet feeds.

Alex remains chubby, despite his efforts to shed weight. But probably his hyperactive work style and save-the-world-from-the-demons enthusiasm take that as their toll on the guy.

He promises to never commit suicide. So if he’s ever found with a bullet in his head, or his car wrapped around a tree, somebody killed him.

Frank Touby is editor of The Bulletin, Journal of Downtown Toronto

2015-01-18
Bulletin Editor
Previous: Market crafts vendor says city department wants all of them out
Next: Condominium market in GTA closes fourth quarter on high side