Condominium market in GTA closes fourth quarter on high side

Posted by: Bulletin Editor January 19, 2015 Comments Off on Condominium market in GTA closes fourth quarter on high side

Interest in ownership housing in the GTA, including demand from first-time buyers in the condo market, is extremely strong. The majority of households understand that a home purchase represents a quality long-term investment. 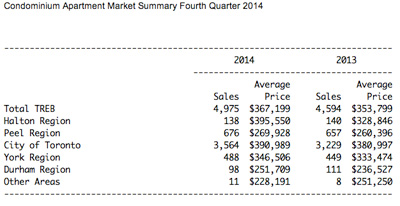 “Despite very strong condominium apartment completions over the last two years, we have not experienced a glut in inventory. The number of buyers has more than kept up with the number of units available for sale. This is why we continued to experience above-inflation average price growth in the condo segment,” said Jason Mercer, TREB’s Director of Market Analysis.

Paul Etherington is President of TREB