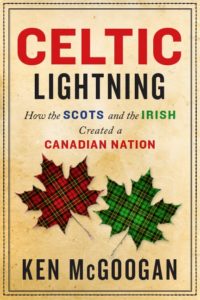 Author Ken McGoogan tells a fascinating tale of how the Scots and Irish immigrated in such great numbers that they shaped Canada in their image. He is the guest speaker at 7 pm on April 28, 2017 at the Enoch Turner Schoolhouse,106 Trinity Street, Toronto M5A 3C6.

Celtic Lightning, published in 2015, plunges into the perpetual debate about Canadian roots and identity: who do we think we are? Ken argues that Canadians have wrongly neglected “cultural genealogy,” and has great fun showing why the crucial figures of Scottish and Irish history — heroes, rebels, poets, inventors, explorers, pirate queens — belong equally to Canada and Canadian history.

Ken McGoogan is the author of more than a dozen books, among them four about Arctic exploration: Fatal Passage, Ancient Mariner, Lady Franklin’s Revenge, and Race to the Polar Sea. Those works won such awards as the Writers’ Trust of Canada Biography Prize, the UBC Medal for Canadian Biography, and the Pierre Berton Award for History. Ken’s other books include Kerouac’s Ghost, How the Scots Invented Canada, and 50 Canadians Who Changed the World. In September 2017, Ken will publish Dead Reckoning: The Untold Story of the Northwest Passage.

Ken worked as a journalist for two decades at three national newspapers. He has served as chair of the Public Lending Right Commission, and is a fellow of the Royal Canadian Geographical Society and the Explorers’ Club. Ken teaches Creative Nonfiction through University of Toronto (Continuing Studies), and in the master’s program at the University of King’s College in Halifax. Every summer, he voyages in the Northwest Passage as a resource historian with Adventure Canada.

The Annual General Meeting of the Enoch Turner Schoolhouse Foundation, which is presenting the talk, precedes it at 5 p.m.