Largest campus telescope in Canada to be installed at York University

Posted by: Bulletin Editor October 2, 2017 Comments Off on Largest campus telescope in Canada to be installed at York University

It seems as though York University in Toronto will be getting a new and very exciting piece of equipment next year, as the largest telescope in the country will be installed on campus. The announcement went on to state that the new telescope will be a one-metre model, which is much larger than the 0.4 metre telescope the university currently has. 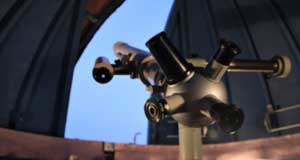 Used for a Number of Purposes

This all-new telescope, which will be installed next year, will be used for astronomical research and public outreach. Because the telescope is so large, it is able to gather more light in the mirror which means greater detail can be seen. It also works well in those areas that have high light pollution. Right now, Canada’s largest telescope can be found at the University of Victoria in British Columbia, and is 0.8 metres in size.

As it stands, right now the York University campus has two telescopes. There is the 40-centimetre one (which the new one will replace), and a 60-centimetre one. This new telescope will open new doors for students and allow them to conduct research with a further reach. The telescope itself will be custom-built to meet the university’s specific requirements and needs.

As an added bonus, the telescope will be open for public viewing of the sky on Wednesday nights. This means it’s not just the students who will be benefiting. There will even be online, live viewing on Monday nights hosted by the university. They will take requests of what the public wants to look at, and then narrow in on it.

The public can expect to see images from far away galaxies and distant universes thanks to the CCD camera found on the telescope. The detail in the images will be much greater than ever before, which will provide an awe-inspiring experience.

As for the research being conducted by the students, they will be able to research broader things thanks to the strength of the telescope. They will now be able to find more of what they are searching for, giving the school’s astronomy and astrophysics departments a huge advantage over many other schools.

It will no doubt help to draw in more students who are eyeing an astrophysics or astronomy program. Look for more of them to consider the school and the York University residence.

As for the funding for the new telescope, the Carswell Family Foundation made a very sizable donation of $500,000 which was then matched by York University and its faculty of science. It will be located in the university’s observatory, which was built in 1969. In honour of the donation, and Allan Carswell’s contributions to science, and the community, the observatory will be renamed as well and will be called the Allan I. Carswell Astronomical Observatory. Carswell is a well-known physics professor emeritus among the scientific community.

The telescope is expected to be installed and operational by late summer, early fall in 2018. It is expected to draw an additional 5,000 visitors per year to the campus as the public is given a unique opportunity to see even more of the universe.