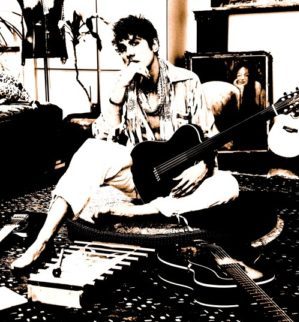 Where Leonard Cohen was writing unforgettable books, As Waters (AKA Tristan Avakian) was rockin’ out big spectacle stage shows. So what qualified him to make a classic heartbreak, singer-songwriter album?

Tristan Avakian is known as a rock guitarist, performing in some of the biggest stage shows of the last decade: Rock of Ages, Hedwig, The Book of Mormon and the award-winning Kinky Boots, which has just wrapped up it’s Toronto performances.

Originally a New Yorker, Avakian was working with Cirque du Soleil when in 2006 he signed on as a lead guitarist with the hit show We Will Rock You, bringing him to Toronto. He did roughly 1400 performances with the show, over four productions. He’s since made the city his home. “I love it here. Toronto musicians are second to none.” He pauses and adds with a laugh, “They may give you shit, but it’s appropriate.”

But it is under the name As Waters, Avakian’s new artistic persona, that he has released his debut album of the same name — a collection of stirring songs that call back to an earlier era of rich, personal music.

The name also lends itself to the title track, derived from a chapter heading in a novel Avakian read years ago: Sister Carrie, by Theodore Dreiser. “The first modern story,” he explains, “with characters that are no hero.” And yet the main character, a fallen woman, comes out on top. “The full line is actually ‘When Waters Engulf Us, We Reach For a Star,’ but ‘as’ sang better than ‘when.’ I’ve had the pre-chorus and title of that song for years.” For Avakian, it’s only recently that “the world cracked open, key found the door and it swung.”

“I wanted to do something different from the spectacle and drama… something quiet and intimate where the drama comes from the stark texture.”

With a battered guitar purchased in Montreal, one that could “fit in the overheads” during the North American tour for We Will Rock You, the songs started to come. The music that emerged was a cathartic release of heartbreak.

The songs were written on the road, but tested at open mics across North America. “If the room went quiet, it was good.” People were telling him how much his songs had touched them. He felt he had no choice but to make an album, and it needed to be a statement, something lasting.

The record grew organically with songs picking up the cultural identity of the cities he was in. The song “Arlington” burst out of him unexpectedly, like channeling the voice of a ghost while staying in a hotel across from the cemetery. “It was like, I don’t want to write this, but it felt so good so I continued. Sometimes, you have to get out of your own way.”

“Minneapolis,” a beautifully melodic and devastating love song, featuring Avakian alone with his guitar, was written in one night. This track has nothing to do with the city, he said, “but sometimes you just have to let a working title stick. It adds to the mystique.”

Other songs were more laboured. “In ‘Amnesia’ the chorus came easy, but the verses not. I was trying to write something as strong as ‘Hallelujah.’ It was like mixing cement–only so much time before the shovel freezes, then you’re done.” Did Cohen ever struggle like this?

With “Hollywood Ending” he had the title first. On the Rock of Ages tour, he knew where the show was ending, so the lyrics and music came second. Heartbreak and endings go hand in hand.

These songs were a new experience for Avakian. Here, the lyrics generally came first. With past writing, it was usually the chords and melody — “I sometimes knew what I wanted to say, but not how to say it.” Not the case in As Waters. The lyrics are raw and deeply felt. “It was hard to sing some — I’d get choked up. It takes time to sing it. The worst thing is not to be understood; the best is when they do. It fixes everything.”

It can be daunting to release an album, especially a debut, but Avakian’s only anxiety is about not moving forward. “What matters is making new friends, writing and to just keep swimming. Dead sharks aren’t sexy.”

The songs are eclectic, each one a surprise. But throughout there is a consistency beyond the voice and emotion. Each song is “necessary.” On a tour stop in Nashville, Avakian hooked up with producer Gary Gold to start recording. (Gold has worked with artists such as Smokey Robinson, Christina Aguilera, Carlos Santana and Stevie Wonder.) Gold was relentless in testing a song. It had to be “like a life preserver for drowning — like jumping in at the deep end.” Once a few songs were recorded Avakian launched a successful Indiegogo campaign to fund the rest of the album. From there recording was an almost hallucinatory experience, each song becoming “clear like a big black line around it.”

For an album of strictly necessary songs, there are a couple oddities. “An Open Sky” appears in two different versions. The first is the polished one. The alternate version, towards the end of the album, is the original demo. He admits it’s not perfect, “but the percussion on that demo track couldn’t be beat.” This album is all about what feels right. Including the track made sense.

There is also a cover song from Beck Hansen’s Song Reader book of sheet music — songs Beck wrote but never recorded. Avakian was playing through the book when “Just Noise” jumped out at him. He has since listened to other recordings of it, but no one else has imagined it as a Burt Bacharach style tune. But to Avakian, “it was obvious.” It could only be that. It also was necessary.

As Waters is a heritage album, tube-recorded with musicians together in a room. The goal was to “make an album of Cohen songs you’ve never heard before,” because Avakian wrote them. It wasn’t made to “satisfy quarterly reports.” This is Bob Dylan. It’s Bon Iver and Amy Winehouse. Music recorded because it had to be.

“Bowie said that we should always go deeper into the water. Where you’re feet don’t touch the bottom, that’s where you want to be.” What makes Avakian qualified to write this kind of album? Everything.

Have a watch/listen to a track from the current album:  TITLE TRACK VIDEO, “As Waters Engulf Us We Reach For A Star”: https://youtu.be/Y7BEZtS01yI or AUDIO: https://soundcloud.com/tristanavakian/as-waters-2?in=tristanavakian/sets/as-waters-1.