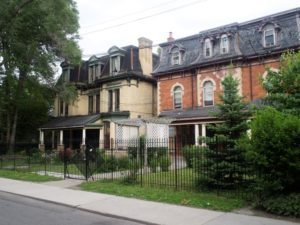 The handsome TCHC properties on Winchester, due to be leased to Margaret’s House.

Downtown residents know that the social climate of a neighbourhood can change in the space of fifty meters, or the time span of a few weeks. The East and West sides of Parliament St. above Carlton are a perfect illustration. East of Parliament lies Cabbagetown, now a fully gentrified neighbourhood. Winchester Park, lying westward toward Sherbourne is another story, with far more mixed income levels and housing types. It presents a far different set of challenges to its residents.

The Winchester Park Residents’ Association (WPRA) has a long history, but it has had episodic levels of activity (basically around 1981, 1996-99, and 2015-16), being recalled into existence by particular stresses on the community of the day. It defines itself as a residents’, not a ratepayers’ association, and many itels on its agenda focus on community safety.

Its boundaries are Sherbourne, Wellesley, Parliament and Carlton Streets, and it includes the Fieldstone and High Garner co-ops, and the patrons of Winchester Street School. Winchester Park itself lies near the centre of the area (Ontario and Winchester). The lower half of the area (below Winchester) is now very gentrified. The upper half, as noted to the Bulletin by one informed observer, may actually be denser in social housing than Regent Park before its regeneration. The density creates live issues for safety in the neighbourhood.

On June 7, the WPRA met on the garden roof of Hugh Garner Co-op to consider three issues of urgency. The first was a presentation by Covenant House on the redevelopment of a property to be used as a home – not a shelter – for young, homeless women who will live there for an average of 18 months before entering the community.

Covenant House has a large main shelter and residential building of 350 beds at 30 Gerrard, and up to now has leased outside apartments for youth-in-transition, but, as Executive Director Bruce Rivers noted, this is their first experiment with a separate property. The residence will have a permanent 24/7 ‘house mother’, and will accommodate up to seven young people at a time on a basis of abstinence – no drugs, alcohol, pets (except service dogs) or guests. Renovations are expected to be completed this summer and the first residents to be staged in over a period of weeks thereafter.

Rivers’ presentation was well received by the gathering, and any concerns about community safety that may have existed appear to have been addresses. The major discussion in question period focussed on the safety of the residents themselves. Community Matters representative Chris Hallett expressed strong concerns about the intention to turn the back patio into a smoking area, noting that the adjacent laneways can by no means be considered safe. Rivers assured the meeting that the most stringent external security measures will be put in place, to which Hallett responded by asking what the estimated speed of response time would be “when they all fail at 3 in the morning’.
Hallett expressed specific concern about whether there would be a rear entrance to the property. (Just before press time, a Covenant House spokesperson told The Bulletin that the question was still under discussion.)

The meeting then turned to a somewhat analogous situation at the TCHC properties at 13-15-17-19 Winchester, across from Winchester School. These very handsome properties have been a source of community safety/disruption issues for some years. They are now to be leased to Margaret’s House (whose original property is on Broadview), fully renovated in accordance with heritage standards, and sublet to Margaret’s clientele, women with mental health issues who are deemed able to live in the community. The consensus of the meeting was that both the Covenant House and Margaret’s House propositions represented a very desirable trend toward devolving management of smaller housing properties from TCHC itself to third-party tenants with a direct interest.

The third major item was a very modern problem arising from the growing ‘shared economy’ sector. A stretch of Bleecker Street (92 – 96 – 102 – 104 – 106) has been taken over by absentee ‘professional landlords’ who are renting them out via Air B’nb as party houses, causing serious noise, garbage and disorderly behaviour issues. WPRA Board member Luanne DaCosta, who was herself very recently forced by the disruption to move from her Bleecker St. home to Amelia, has noted that the activity is causing a hollowing-out of the street. Because the ‘shared economy’ legal space is so novel, City zoning bylaws have yet to find a way to deal with it, though DaCosta noted that after representations to Executive Committee, zoning inspectors are keeping a closer watch.

Thorben Wieditz of Unite Here (hospitality workers) Local 75 told the meeting that this is not an isolated situation, that in fact the conversion of housing units into unsupervised party houses is becoming a major issue across North America, and the owners play a ‘whack-a-mole’ game with authorities by delisting from one electronic reservations site and appearing on others.