What will Jesus do when he returns?

Posted by: Bulletin Editor February 9, 2017 Comments Off on What will Jesus do when he returns?

When Jesus returns, “He will mend the broken and create a new Heaven and a new Earth,” says Colin, 12. “He will raise the dead from the grave and will take all those who believe in him to eternal paradise.”

In case you haven’t noticed, this world and the people in it are broken. As the nursery rhyme goes, “All the king’s horses and all the king’s men couldn’t put Humpty back together again.”

Why? Because Humpty had a great fall.

The fall as in Adam and Eve’s first sin affected not only our original parents and us, but creation itself. It’s hard to imagine the effects of the fall because all we’ve ever known from our experience is a broken world. We think it’s normal. 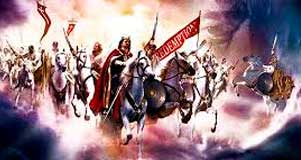 Jesus returns to earth in glory

put all the fallen, mangled pieces back together again. If we had even a little inkling of the renewed world Jesus will create, we, too, would be groaning and yearning for the day of his return.

I’m so glad that God is in the restoration and renewal business. “Redemption” is the Bible word. A modern word is “upcycle.” God is going to upcycle the old, broken stuff of this world and make it new. That includes redeemed people. Resurrection bodies won’t break down. Doctors will be out of a job.

“For we know that the whole creation groans and labors with birth pangs together until now. Not only that, but we also who have the firstfruits of the Spirit, even we ourselves groan within ourselves, eagerly waiting for the adoption, the redemption of our body” (Romans 8:22-23).

Several times Jesus said he would return in the clouds (Matthew 26:63-64 & 24:30). Jesus also said, “I am the bread of life” (John 6:49). Does this mean he is literal bread? Of course not. As Jesus used “bread of life” as a metaphor to describe his life-giving power, so “coming in the clouds” is a metaphor or a code phrase for God’s judgment.

The destruction of Jerusalem and the temple all happened within a generation just as Jesus predicted (Matthew 24:34). The Roman siege that began in the spring of AD 67 and ended in fall of AD 70 (3.5 years) left Jerusalem, its temple and people utterly desolate.

Although Jesus already came in the clouds to judge his people, keep looking for his return to establish a kingdom “in which righteousness dwells” (II Peter 3:13).

Think about this: We live in an age of grace where all (Jew and Gentile) have an opportunity to enter into God’s kingdom by trusting Jesus Christ as their Saviour. Don’t miss it!

Ask this question: Are you ready for Jesus to return?