Go around back of 33 Villiers St, an old Port Lands warehouse now converted to general studio space, and you enter what at first sight and sound is a cross between the Battle of Five Armies and a loudly genial lumbersexual convention. Beards, tattoos, ball caps on backwards, and a lot of very sharp, heavy steel.

It’s loud, bright, cheerful, the guy on the check-in desk makes you sign a waiver while offering you one of his home-made Rice Krispie squares, and 15 feet in front of you an athletically attractive lady winds up and lets go with—at a guess—half her own weight in ironmongery.

To your left, a large crowd in a bullpen behind the safety line begins a chant, also displayed on many t-shirts:

Remember Primal Man
Who only had his hands
Who forged in fire and steel
The tools to kill his meal
We honour him this day,
And pray our axe to stay.

It’s the Oath of the Backyard Axe Throwing League (BATL), recited every week before competition. It’s chanted all over Canada by thousands of followers, As an organization operating since 2006—it began in a backyard in Toronto’s Little Italy—BATL has enough business heft to have its own contractors outfitting spaces to league spec as axe-throwing lanes in eight locations across the country.

In principle it’s like darts or archery or shuffleboard or curling except, you know, axes. Trevor Walsh, general manager of both Toronto locations (the other at 213 Stirling in The Junction) runs through the structure and rules:

“There are 30 people per “league” so 460 league members in Toronto alone. Each league runs eight weeks; on the eighth and final week we have our league final playoff for the top sixteen players. In play, a bullseye is six points, the red ring is three points and the blue ring is one point. There are two little green dots called the ‘clutch’ worth seven points; you can only go for those on your final round, and you have to call the one you’re going for, like a billiard shot.”

There are two types of axes used; the small hand axe used in league play, and, in case of a tie at the end of play, they go three rounds (five throws is a round) with the long axe. If that is tied, it’s sudden death, again with the long axe.

“It’s something completely unique,” says Walsh. “People who hear about it may not think much about it but then they get drawn here by an event and fall in love with it.” Walsh adds that the gender mix is about 55% male, 45% female.

Dana Harrison of Riverside first came out for a friend’s birthday party and was immediately smitten (by the sport, not the axe). Aaron Moore of Brampton says, “It’s just really fun to throw really sharp stuff at wood.”

For more information and to try out the sport: www.batlgrounds.com. 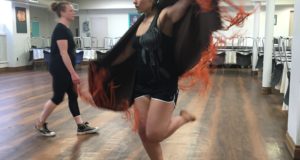