Posted by: Bulletin Editor June 10, 2014 Comments Off on Is TCHC deliberately blocking people from voting?

Is the Toronto Community Housing Corporation (TCHC) above the law? Has the TCHC deliberately impeded the civil rights of the poor, the working poor and people with disabilities in the Downtown core and perhaps at the other properties that it is supposed to support?

Moss Park is a complex of four high-rise buildings bounded by Shuter Street on the north, Sherbourne on the west, Queen on the south and Parliament on the east. This is a mixed community of people, some who pay full market-value rents, others who pay geared-to-income rents.

Some have visible and invisible disabilities. Some have mental health issues. Some are just elderly. Some residents are working poor. Some are working poor. The complex is maintained by TCHC, the same corporation whose board members were fired for misusing tax dollars and whose most recent manager, Gene Jones, was fired after being accused of intimidation by the residents. My complaint is the impedance by corporation employees to allow and/or support the residents of Moss Park in exercising their right to vote in any election.

I have lived here through two elections. If anything impedes another voting day, I would strongly suggest that TCHC is deliberately attempting to obstruct the voting rights of the citizens of Moss Park and perhaps any other complex they manage throughout the city of Toronto. The following is my experience with the Moss Park elections. 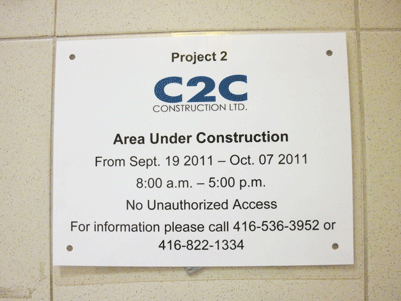 It is September 2011. The provincial by-election will be held on Oct. 6, 2011. Toronto Community Housing Corporation has decided that they need to widen the door to the washroom in the rotunda to make it wheelchair accessible. The laser-cut sign was screwed to the wall in the main foyer to announce that the work would not be completed until October 7, 2011, the day after the by-election.

The rotunda is the usual space where the people who live in the Moss Park apartment complex at 275, 285 and 295 go to vote. The construction crew blocked the door with construction scaffolding and yellow tape as per safety protocols so that no one could access the room. They took an exceedingly long time to complete this small, uncomplicated project.

While widening a doorframe to make the washroom more accessible is admirable and required by law, taking from Sept. 19 until Oct. 7 is not only excessively long, it impedes the election from going forward on this site. (My son is a journeyman with his own business and informed me that a week would be excessive for this minor alteration, especially with three workers.)

It is Sunday, Oct. 2, 2011 and the scaffolding is still blocking the door to the elections spot in the rotunda. I called the Elections Ontario office and the gentleman who answered the phone huffed: “If the spot is not appropriate why were we not informed so that we could make a different arrangement?”

I informed him that the spot was indeed appropriate and explained what I had witnessed with the construction. Someone from Elections Ontario came to inspect the site and the work was completed with the mess cleared by Wednesday Oct. 5 but the inhabitants of the three buildings this work affected already knew that the rotunda wouldn’t be open on the day of the election. They were not informed that the work was completed.

Consequently, the election turnout was low.

In October 2008, the voting stations for the federal election weren’t set up in the rotunda but were moved to a much smaller space in the building at 285, the corner of Parliament and Queen. No reason was given for this move. A security guard was posted at the door. He would not open the door for anyone without a key fob to get in. He told me that he was doing his job. I had difficulty entering the building and would not have been able to enter had someone who lived in the building not opened the door. There was already someone from Elections Canada in the voting room. He was concerned because there weren’t enough volunteers to have someone stand at the door to let people in to vote. He told me that there were problems of accessibility to voting stations throughout the city where TCHC manages buildings.

After the mess around the by-election, I called TCHC and spoke to a maintenance manager. Over protests of the necessity to ensure the safety of the project, I informed him of my son’s certification and suggested that what TCHC was doing was violating federal law and that if it happened again, I would make certain that they were investigated. My experiences are being made public to remind TCHC of that “promise”.

As a Canadian citizen, I have the right and the responsibility to vote in any and all public elections. I will NOT allow anyone to deny me that right. Any attempt to stop me from exercising this right is a violation of the Canadian Charter of Rights and Freedoms and is a federal crime. Federal crimes against Canadian citizens need to be stopped and adjudicated.

The facts are that many of the people living here are elderly, poor, have disabilities, are struggling as single mothers, and/or are the working poor. They too are citizens with civil rights under the Charter. Can we, the citizens of Canada, the inhabitants of Toronto, stop this neo-liberalist intrusion into our fragile hold on our most visible form of democracy? Can we stop big business from denying us our civil rights and from denying vulnerable citizens their civil rights?

2014-06-10
Bulletin Editor
Previous: Embracing the Rhone Rangers
Next: Careful where you ‘lay’ your vote is this rooster’s message