On August 26th PC MPP Monte McNaughton was spotted in the Scarborough—Rouge River riding for the first time during the writ period. He posted photos to Twitter with Markham Public School Board Trustee Allan Tam. Seen in one of the photos is Mr. Tam speaking with a woman who is holding the Simplified Chinese version of Patrick Brown’s “scrap sex-ed” letter while McNaughton looks on. As they spoke to voters and distributed the letter, advanced voting was underway just across the street from their location. 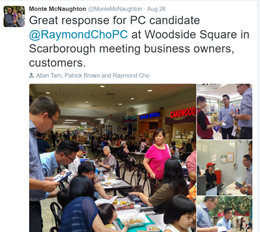 Three days before Patrick Brown’s flip-flop on sex-ed, Brown’s social conservative lieutenant was using the infamous “scrap sex-ed” letter to shore up support in the Scarborough—Rouge River by-election. On the same day, Patrick Brown was in the riding to attend TamilFest.

When asked about the letter, Brown referred questions for comment to the campaign’s co- manager, Bob Stanley, who also happens to be the PC Party Executive Director and is known to be the power broker who convinced McNaughton to drop out of the PC leadership race to endorse Brown in 2015.

Considering this new evidence, Brown’s insistence that he was unaware of the letter has become untenable. How could Patrick Brown be unaware of a letter under his own name, on PC letterhead, authorized by the CFO of the PC Party, distributed by his own caucus on the same day he was in the riding for a campaign that is managed by his own party’s Executive Director?

Patricia Favre is a public relations operative with the Ontario Liberals. 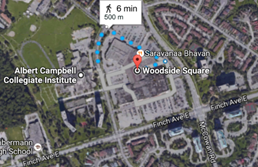