Posted by: Bulletin Editor December 30, 2013 Comments Off on Cops mum on suicide of Smitherman’s husband

George Smitherman and Christopher Peloso
at their wedding in 2007

The husband of former Deputy Ontario Premier George Smitherman, Christopher Peloso, has been found dead by Toronto Police and it has been confirmed he committed suicide, but not by what means.

“Freedom from depression has been elusive for Christopher and once again he is missing and we fear for his safety,” Tweeted Smitherman on Sunday. Peloso had gone missing earlier in 2013 and was found curled up near railroad tracks.

“We will celebrate his life and we will find comfort somehow in knowing that he has found peace from the depression that has wreaked havoc on his mind,” wrote Smitherman.

“He will always be remembered for his dedication to others.” http://bit.l/StatementfromGeorgeSmitherman …

The couple have two adopted children. 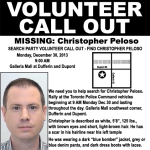 Prior to the discovery of Peloso’s body, Smitherman had released this in an email just after 2 a.m. on Dec. 30

Rae, a longtime friend of the couple said, “I must confess I had been fearing the worst but hoping for the best when he went away for a second time.”

“He was very kind and very loving, very thoughtful person. He was a fascinating sort of partner and husband to George because George is a very dynamic and outspoken and sometimes bombastic individual. Chris, in many ways, was quite the opposite…they had had a wonderful relationship and a wonderful family.”

Rae said Peloso had a continuing struggle with depression.

Smitherman retired from provincial politics and ran for Mayor of Toronto but lost to Rob Ford.