Posted by: Bulletin Editor November 14, 2013 Comments Off on McQuaig concedes to Freeland for Toronto-Centre seat 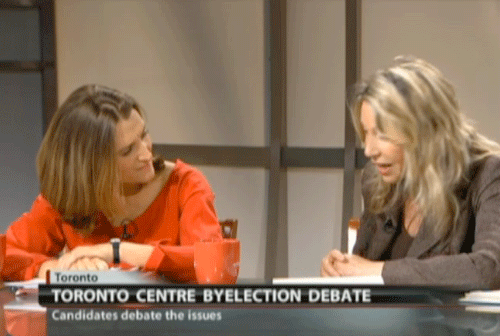 Christia & Linda go at it 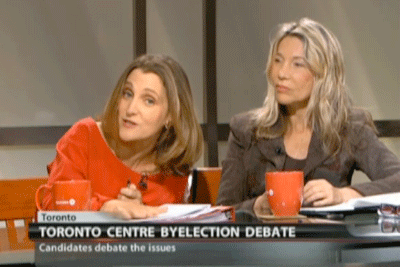 A question from a viewer.

She says she feels proud of her campaign because it was about issues. “We didn’t back down, we addressed issues in this riding. We got a chance to talk about a subject most important: the increase in inequality in the last 25 years.

“It’s not some inevitable development, but the result of Liberal and Conservative policies” over the past three decades.

“It doesn’t have to be this way,” she said. She called this the most successful campaign the NDP has ever had in the Toronto-Centre riding, which has been traditionally Liberal.

Christia Freeland thanked her family and riding voters for the election victory in an already Liberal riding. She said, “Democracy means wer need people fighting for each side and it was important to be in this together.”

The CPAC video link to the heated and meaty all-candidates debate is at the bottom. But let me save you a bit of time. Skip to the 22-minute mark of the video and you’ll have the core of the candidates’ positions and more interesting, the face-off between the top dogs in this battle.

Those two main contenders in this debate and in this Toronto-Centre riding by-election were Liberal Chrystia Freeland and New Democrat Linda McQuaig. (Rather than my outlining their positions, you should watch the video linked below.)

The other two candidates were bookends sacrificed by their parties in the undoubtedly fruitless effort to win the seat for either the Tories or the Greens.

Freeland is a fan of free trade, along with Tory Geoff Pollock who sounds a bit like Rob Ford as he argues for Tory tax cuts. He waxes almost poetically about how the curse of free trade is not the evil we know it to be. He touts the Stephen Harper regime’s ongoing sellouts to transnational corporations in the form of still more free-trade attacks against Canadians’ economic and physical well-being.

Pollock is a decent man and a respected lawyer who has ambitions to serve in political office and sadly has chosen an especially bad regime. Should he actually win the seat, which is considered a long shot, it’s not a vain hope that his decency and common sense would prevail over obeisance to Harperism.

John Deverell, a recently converted Green and a previous Grit often sounds NDP-ish and attacks the lack of democracy in Canada as well as “climate change” for which he prescribes carbon taxes to be paid to the poor as an “income supplement.” It’s an outstanding notion if there’s any genuine reason, aside from that presented by self-interested corporations and university departments, that carbon dioxide has any impact on our climate.

Consider the fact that the ice caps on Mars were also melting at the same time as ours, and at the same time that the normal 11-year sunspot cycle has been off kilter for a few years now and the sun is the greatest warming device in our part of the universe.

Again (if you’re been reading my rant instead of just watching the video), to get to the core of the candidates’ advocacy for the job, skip to the 22-minute mark of the video and you won’t have missed a thing.