Finding, within ourselves, the power to forgive

Posted by: Bulletin Editor January 17, 2017 Comments Off on Finding, within ourselves, the power to forgive

Visiting Atlanta’s Martin Luther King Jr. Center for Nonviolent Social Change, I once overheard a black boy ask his mother: “Why were white people so bad to us?” The question was neither surprising nor unreasonable. The King Center’s detailing of racism’s history makes it a place – Yad Vashem memorial to Holocaust victims in Jerusalem is another – where those within the suffering group will feel righteous anger, and those outside it will want to crawl out of their skin to evade suggestions of complicity.

The answer from his mother transcended reason to become beauty.forgiveness

“Some were bad to us,” she said gently. “But not everyone. A lot helped us. Some fought for us.” forgiveness

Her voice held the perfect harmony between justice and charity. She spoke justice in telling her son the truth, which was his due. She was under no obligation to go further. Charity, in its fullest form, bade her tell the fuller story.forgiveness

The same virtue permeates Hidden Figures, a quiet movie released, fittingly, on Christmas Day and which has surprised by rivalling the latest Star Wars at the box office. It’s the story of real-life star wars between the United States and Russia to launch manned space flight 55 years ago. It details the lives of three black women whose mathematical genius got John Glenn into orbit and made the first moon landing possible. Its beauty is it treats with unflinching justice, yet authentic charity, the appalling racism Katherine Johnson, Dorothy Vaughan and Mary Jackson suffered while working for NASA in the early 1960s, yet which they were able to overcome through unwavering faith.forgiveness

Their faith is not merely in their own abilities, though they know how gifted they are. At age eight, Johnson was identified as a math prodigy and, in the heart of the segregated south, accepted at an elite school. Jackson fought in court to be allowed to take night school courses that helped her become NASA’s first black woman engineer. Vaughan, we’re told, wrote the code for the space agency’s inaugural IBM computer. 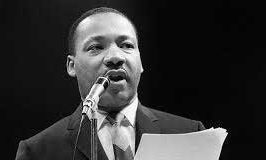 The three spend much of Hidden Figures in a basement room crowded with other “coloured” female mathematicians. They are forbidden from working with their white counterparts. They are human figures hidden from the white gaze pervading NASA. Even when Johnson is brought up to work with whites, she must run a half-mile to use the “coloured” bathroom – in 1961.

The faith at the heart of Hidden Figures, however, is very much a gift of the black church, of the Christianity taught to and made infinitely richer by black slaves and their descendants, of the Christian struggle to inform justice with charity that moved Martin Luther King Jr. to sacrifice his life for non-violent social change.

Change – the pressing need for it, the daily agonies of obtaining it – is central to film. It’s a centre that splits, however, on whether widespread civil change catalyzes individual change or whether personal conversion necessarily precedes the broadly political. Critics have faulted Hidden Figures for agreeing too quickly with the latter, disregarding the essential role of the civil rights movement.

But such criticism disregards the power of the quiet moment, one that passes almost like an eavesdropped conversation, when Vaughan’s boss, a white woman who viciously humiliates and denies her underlings proper recognition, insists she truly has nothing against “coloured” people.

“I truly believe you believe that,” Dorothy answers softly and with the firmness of one telling the truth in charity.

The language of belief, the juxtaposition of true versus distorted belief, shifts our perception of the conduct of the female boss, and the other whites in Hidden Figures, beyond the skin-crawling constructs of racist ideology. It moves us past the cringe-inducing patterns of institutional power politics. It opens us to the human capacity to hear, to imitate and to repeat the words: “Forgive them, for they know not what they do.”

It doesn’t deny the violent wrongs of those dehumanizing constructs and patterns. But it figures in, as an act of charity, the confusion, ignorance and blindness hidden in all human hearts. It illuminates the path of justice through faith in love.

— Peter Stockland is senior writer with Cardus, and publisher of Convivium.ca.