Posted by: Bulletin News November 25, 2016 Comments Off on Help ID victim of fatal collision on George at Dundas

On Thursday, November 24, 2016, at 8:10 p.m., police responded to a call for a personal injury and later fatal collision on George Street, north of Dundas Street East.

It is reported that:

The man received life-threatening injuries and was pronounced dead at hospital.

Police are seeking the public’s assistance identifying the man. He is described as mid-to-late 50s, with grey hair and a goatee, and a scar on his left eyebrow. He was wearing a black, puffy, quilted jacket, a navy-blue hoodie with the word “CANADA” and a maple leaf in red, black denim jeans, and black Adidas runners with green stripes.

Previous: Add to Toy Mountain at Ford dealerships until Dec 21
Next: Art auction turns refugee Affair into a $13k party 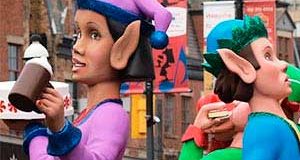