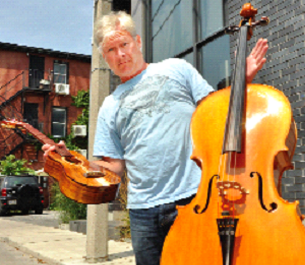 Steve McNie with his ukulele and cello.

The all-strings Corktown Chamber Orchestra will take on a new look this year when it adds brass and woodwind sections.

The 25-member orchestra which formed about 10 years ago has occasionally used brass and winds for past concerts. But now those instruments will be permanent additions.

“This is a transition year for us,” says Corktowner and cellist Steve McNie who co-founded the orchestra with its conductor and music director Paul McCulloch, cellist Paul Van Dongen and violinist Martin Gwynn Jones.

“As a strings-only group we’ve been able to enjoy a wonderful chunk of repertoire that more comprehensive groups can’t because they need to keep the other sections busy. But we just have too much fun when we expand the palette and they keep asking us when they can book their Tuesday eves (rehearsal night) year ’round,” says McNie.

But don’t think you can pull out your dusty trumpet or clarinet from the back of the closet and expect to join up. CCO is proud of its players’ musical abilities so you’ll have to be good before you start. “We invite new players to join us for three rehearsals to give each other a sense for musical ability and personality fit,” says McNie.

There are no auditions, no fees and no one—not even the conductor or section leaders—gets paid. Another thing the CCO looks for in its members is non-musical contribution, like getting involved in concert promotion or maintaining the orchestra’s website corktown.co (not .com).

“There are so many different things that are important to the on-going administration of an orchestra. We run it in a way that would make Marx proud. In addition to playing, everyone contributes to the group’s non-musical well-being,” says McNie.

Actually, its five-concert regular season of Thursday evening performances is secondary to the satisfaction and fun that members garner from just by getting together to make music.

“Our concert schedule is not our be-all and end-all,” says McNie. “We do this for the sake of having a place to go and make music of a decent calibre. Concerts provide a goal and just enough pressure to ensure that we invest into practice between rehearsals”

The place they go to is Little Trinity Church on King at Parliament on Tuesday evenings from 7:30 to 10 p.m. Their first rehearsal for the 2014-2015 season is Sept. 2.

CCO collaborates regularly with singer-songwriters and local arts institutions. It wants to do more of that this year, with arts groups from the Daniels Spectrum like the Regent Park School of Music.

McNie studied cello at the University of Toronto. But the call of his marketing bent trumped that of his cello’s strings. “When I finished school I was lured by the business of music as opposed to the performance of it.”

For decades he worked for major record companies, including GRT, Warner Music and A&M (the “A” in A&M is Herb Alpert of Tijuana Brass fame). For seven years he managed Sharon Lois & Bram. After that he worked in digital media marketing for CBC and then, CTV.

But eventually the urge to return to the art of music as a vocation caught up with him. Cello is McNie’s principle instrument, but he plays accordion and bass in The McFlies and also the ukulele every Wednesday evening from 8 to 11 p.m. at Dominion on Queen with the Corktown Ukulele Jam (CUJam), a community he co-founded in 2009 with McFlies band-mate, David Newland.

The first hour-and-a-half he teaches a ukulele workshop. Next up is a group jam where players read charts for “every imaginable style of music” projected onto a 10 x 8-foot screen. After that there’s an open stage.

McNie is earnest about the ukulele’s legitimacy: they have just as much musical potential as any other instrument, he says.

“I see the cello and ukulele through the same lens and can tell you that it takes similar investment of time and dedication to get really good at both. The ukulele is absolutely not a toy or ‘gateway instrument’ to more noble pursuits. It is no less capable of expression, nuance and complexity than any other instrument,” says McNie.

Upwards to 100 from the GTA and beyond attend the weekly uke jam sessions, some from as far away Germany, England, Australia and Japan. Word of their community has spread so wide that ukulele hero Jake Shimabukuro showed up at their door on a visit to Toronto to speak at Moses Znaimer’s Ideas City conference at Koerner Hall.

The group’s email list has grown to over 1,800 members since forming almost six years ago. “We’re recognized and respected for setting the bar for ukulele events throughout the world,” says McNie. Find out more at torontoUKES.com.

Imagine that — little Corktown with its own chamber orchestra and known around the globe for its ukulele jam sessions.

Previous: The who & why of Ford Nation’s quixotic attachments
Next: Consulations for River St. condos deferred