Posted by: Bulletin Editor June 20, 2016 Comments Off on Confirmation salmon farming a threat to wild salmon

At a special session on salmon farming, held at the North Atlantic Salmon Conservation Organization (NASCO) meetings in Germany on June 8, leading scientists, including the International Council for the Exploration of the Sea (ICES), confirmed that there is substantial and growing evidence that net-pen salmon aquaculture can reduce the survival of wild Atlantic salmon. Despite this, none of the NASCO Parties that have major sea cage production of farmed salmon (Canada, Scotland, Norway and Ireland) presented a strategic plan to provide support for and transition, with timelines, to closed containment facilities.

Norway has introduced a Polluter Pays approach and Green Licenses to stimulate the use of environmentally-friendly technology.  Industry in Norway are taking advantage of the development concessions established by the Norwegian Government to fuel investment into major technology shifts.   Marine Harvest and Hauge Aqua, confronted by rising production costs mainly due to sea lice and escapes, signed a contract in February, 2016, to invest $100 million in development of closed containment systems in the ocean.

Fisheries and Oceans Canada (DFO) has identified net pen salmon aquaculture as a marine threat to the wild salmon populations of the inner Bay of Fundy region, which were listed as “endangered” under the Federal Species at Risk Act (SARA) in 2003.  The wild salmon populations in the outer Bay of Fundy and along the Atlantic Coast of Nova Scotia have been designated by the Committee on the Status of Endangered Wildlife in Canada (COSEWIC) as “endangered”, and the south coast populations of Newfoundland have been designated as “threatened”.  DFO’s recovery potential assessments for all of these wild populations consistently identify sea cage salmon farming as being of a high level of concern to their recovery and survival.

Jon Carr, Executive Director of ASF’s Research and Environment Department, said,  “Closed containment research is being left largely to the private and nonprofit sectors.  Because of private commitment, there are now two operations (Sustainable Blue and CanAqua) in Nova Scotia that are growing salmon in closed-containment facilities for market, with plans to expand.  ASF has been working with The Conservation Fund Freshwater Institute in West Virginia for more than five years now on studies towards economically and environmentally-sustainable closed containment technology that completely separates growing farmed fish from the wild environment.”

A presentation at the NASCO Special Session by Ivar Warrer-Nansen, Inter Aqua Advance, Denmark, on recent development, costs and benefits of closed containment indicates that the progress towards closed containment salmon aquaculture that is environmentally and economically sustainable has been happening fast, especially in the last year.

“It is time,” said Bill Taylor, “that Canada invest in supporting closed-containment facilities, rather than sea cage operations like the one proposed by Norway-based Grieg Newfoundland  to establish eleven marine farm sites in Placentia Bay in southern Newfoundland, using European strain salmon.  This development is in an area where wild salmon have been designated as threatened by COSEWIC.   The company professes that there will be no impact by this very large development on the threatened wild salmon populations because the escapees will be triploid or sterile.  However, the triploidy process is not 100% effective, meaning there will be some fertile European strain salmon that can escape and interbreed with local wild salmon with serious genetic consequences.  There will also be impacts from sea lice and ecological consequences to the already-threatened wild salmon populations located in close proximity to the sea cages.”

“The responsible action for Canada”, continued Mr. Taylor, “is to deal with all the impacts on wild populations of sea cage salmon aquaculture – sea lice infestation, disease and weakening of the wild gene pool through interbreeding – by requiring future expansion in the salmon farming industry to be in closed containment facilities.”

The Atlantic Salmon Federation is dedicated to the conservation, protection and restoration of wild Atlantic salmon and the ecosystems on which their well-being and survival depend.  ASF has a network of seven regional councils (New Brunswick, Nova Scotia, Newfoundland and Labrador, Prince Edward Island, Quebec, Maine and Western New England).  The regional councils cover the freshwater range of the Atlantic salmon in Canada and the United States.

Photo and Press Release available at:

Previous: Why can’t we see God?
Next: Distorting fascism to sanitize capitalism 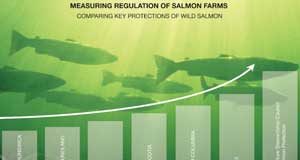