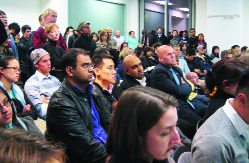 More than 130 neighbours, some saying they were blindsided about the rezoning of a 7-storey building into a 42-storey high-rise, pressed into a community information meeting on Oct. 14 at Metro Hall.

It quickly became confrontational as planners explained that TCHC zoning changes were in line with other area block developments spanning former railway lands south of Front from Spadina to Bathurst.

The area known as Block 31 will also include two schools, capable of handling 1,190 students, a daycare and a community centre with a 9-storey senior housing project built above.

In an effort to calm fears, Peter Zimmerman, the housing development manager for TCHC, explained that affordable housing is not low-income housing.

“This is not housing for low income people,” emphasized Zimmerman. “It is housing for rents that are about 80%  of the average for the City of Toronto. For a 3-bedroom apartment that means about $1,100 a month. Household incomes would probably be between $35,000 and $65,000.”

“Our view is going to be blocked by what you guys call a view enhancing tower, 42-stories high,” charged one woman. “To me it seems a bit disrespectful to people that are there when the original development was seven-stories high.”

Councillor Adam Vaughan pointed out that the homeowners north of the project had similar complaints when they bought their homes and rezoning in City Place took place.

“Views under the Planning Act are not a protected right,”  responded Vaughan.

Angry residents said they will look into what options might be available to them to stop the development, but Vaughan told them that a visit to the Ontario Municipal Board would be a lost cause since the development is in line with the surrounding area.

The city, the TCHC and Vaughan will make up part of a steering committee formed from the meeting that will review residents’ complaints of shadowing, location of the high-rise on the block and traffic concerns.

But as city planner Sarah Phipps informed disgruntled residents, “You are never guaranteed what’s going to happen next door.”

Pending is a page on the City of Toronto website regarding Block 31.

2009-11-08
Bulletin Editor
Previous: Let us help you run for city council
Next: Pandemonium at Yonge and Bloor