Heading into the future Church St., Yonge St. and Bay St. should each have their own character and individuality—Church should be a neighbourhood street, Yonge should be Toronto’s main street—and neither should be like Bay. 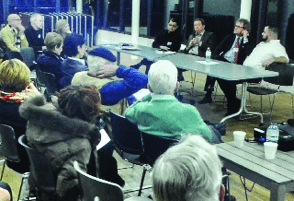 That’s the general impression a panel of 2 businessmen, a city designer and a University of Toronto professor espoused to the annual general meeting of the Church Wellesley Neighbourhood Association (CWNA) in March.

CWNA president Andrew Horberry started the discussion with the question: How will Yonge and Church look in 2016.

“We’ve got to find a way to draw people to Yonge St. from the entire city,” said Glover. “I see it as the central street of Toronto … To do that we have to re-imagine it. It can’t remain the sad-sack traffic artery that it is.”

Glover said that while heritage is part of Yonge’s character the street needs “good, quality places” such as restaurants, entertainment, theatre and special stores. “How do we create the conditions for that to happen,” he posited.

He said Downtown’s demographics and culture is in transition and the younger generation wants to live there. A lot more people are going to be living on Yonge St. in the future, he said, because of its “diversity and comfort.”

He said Church is a different kind of street. “It’s got a different feel to it. This part of Church St. I see as being a distinctive neighbourhood street. It’s got to be focused more on the people who live or work on the street.”

He said because Church is only a block from Yonge it needs to have “an insularity to it. It can’t just become a kind of an extension of whatever Yonge St. is.”

Gaudreault indicated he expects Church St. to stay pretty much the retail street it is. “A small business mentality is associated with the neighbourhood and there’s a strong desire to keep that,” he said. “There will obviously be some development.”

Referring to Yonge as an iconic and culturally diverse retail mecca, Garner spoke of his days as a young Scarborough man heading to Yonge on Thursday, Friday and Saturday nights. “You got off at Bloor and you walked Yonge St.”

Garner said that in the coming century 7 in 10 people will live in a Downtown environment. With that in mind, he said he sees Yonge being a pedestrian mall again with patio space and more greenery.

He added it’s important that, as the street redevelops, small, independent retail be maintained “and it keeps the vibrancy that we want.”

Glover argued that large-scale stores would serve a purpose on Yonge. “If we’re limited to only small size stores we’re only going to get the uses that go into small-scale stores. We do need stores that work with different sizes.”

Gaudreault said small businesses could help themselves by embracing new technology to keep up with customer service. For one thing, he said, more customers today are thinking “green” and want their receipts emailed to them, not printed out.

He said Church Street’s role has been significant to the community, calling it “a cultural corridor that needs to be protected … it needs to play that role in the future, and Yonge St. will be something totally different.”

Parakh said major growth is coming to Yonge, but in a study people have said they don’t want the corridor to look like Bay St. with its towers. He said Yonge’s future has to take into account the heritage fabric that will help determine its “scale.”

He said there could be higher buildings on Yonge, but they would have to be set back. (Parts of lower Bay St., with tall buildings running straight up from the sidewalk, have been popularly referred to as “a canyon.”)

He also called for POPAS (Private Owned Publicly Accessible Space) and parks on Yonge. “These are the ingredients, we think, could make a walkable community (along with) wider sidewalks.”

As for Church it would be much the way it is today, said Parakh, but with some mid-rise infill that conforms to the current streetwall and the character of its materials.

Garner said that with development coming to Yonge and the expected intensified population the transit system has to be improved. “The Relief Line has to be done,” he said, adding that 36% of current transit starts and stops are at Queen, Dundas and College.

“The problem is not getting any better, it’s getting worse,” said Garner. Cycling, too, he said needs to be part of the conversation. Parakh said that for Downtown priority has to be given to pedestrians and not to cars.

Glover suggested developing “a revamped local (transit) system that only works for people who live in the Downtown … We have to rethink the transit equation.” Panelists spoke of the need for senior governments to get back to providing affordable housing with developers offering 3-bedroom apartments for families. Glover said the new generation of developers are more amenable to “building neighbouthoods.”