Posted by: Bulletin Editor November 26, 2016 Comments Off on Choice between spiritual life and spiritual death

God gave us a choice between spiritual life and death “so He could have people on His side,” says Damian, 9. It sounds like we’re picking teams for a giant volleyball or baseball game.

Wes, 11, believes it’s a good thing that there are two teams because “heaven is too heavenly for sinners.”

Lots of people know just how Wes feels. Heaven – with all that imagined singing and harp playing – turns them off. They say they don’t want to go to heaven because their friends won’t be there. What if separation from God is like solitary confinement? Then what? 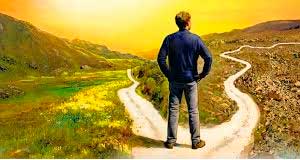 “We would realize our mistakes,” says Stephanie, 11. By then, it might be a little late.

People who joke that they want to go to hell should think again, says Allie, 9, because “no one should choose death.” That sounds good, but every day people smoke, use harmful drugs and drink alcohol to excess even though they know it will cause health problems and possibly shorten their lives.

If people have such difficulty with the more immediate choice for physical life versus physical death, it’s understandable that they’ll have an even tougher time choosing spiritual life over spiritual death. The consequences seem so distant and intangible.

Not to worry, says Kristen, 10: “God wanted to give us all a chance at life.” Yes, says Martha, 7, “Jesus wants us to have eternal life.”

Second Peter 3:9 says, God “is patient with you, not wanting anyone to perish….”

Some people distort this truth and don’t believe hell exists. They say, “How could a loving God send anyone to hell?” Remember one thing about God, says Lauren, 11: “He’s fair.” And Scott says if there were no hell, “there’d be no point in life on earth as we’d all be going to heaven.”

This life/death question has a point, but what is it?

“God wanted to test what He made,” says Cory. The real issue, according to Lacey, 9, is faith: “God wanted to see our faith in Him.”

God gave us a choice “because He didn’t want to force everyone to love Him,” says Mariah, 8. Forced love isn’t love at all. “God wanted to see if we loved Him enough to choose to live with Him,” says Shelby, 10.

What if we all choose the wrong team? What would God do then? Don’t worry, says Matthew, 9, “He’s merciful.” God designed a plan for us even when we chose the wrong team so that he could display something about himself. Luke, 10, says, “It would be showing us grace.”

Okay, but how can we get on the right team? “Jesus died on the cross, and now we can choose to go to heaven,” says Candace, 10. Martin Luther described the faith by which we embrace God’s team as “the hand of a beggar reaching out to receive the gift.”

The reason God granted us a choice between spiritual life and death is “to teach us that we can’t live without Him,” says Casey, 12. Maybe that’s why so many people are struggling; they’re finding out through their bad choices that they need God.

Think about this: Our present life and life after death go better with God because he is the source of life.

Memorize this truth: Jesus said, “I am the way, the truth, and the life. No one comes to the Father except through me” (John 14:6).

Ask this question: Do you know Jesus as the source of your life here and hereafter?

2016-11-26
Bulletin Editor
Previous: The word “PO” changes mindsets
Next: Does modern progressivism have a fatal flaw?