The City of Toronto has announced that, after five years as Chief Planner and Executive Director of the City Planning division, Jennifer Keesmaat has decided to leave the city effective September 29 to pursue other interests.

Keesmaat joined the City of Toronto in September 2012 and since then has successfully championed and led a wide array of projects including the first comprehensive plan for Downtown in 40 years (TOCore), 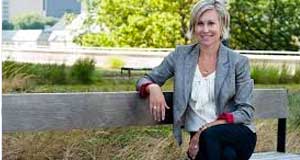 “I want to personally thank Jennifer for her tremendous passion, leadership and innovation in driving forward a number of major projects for the City as we continue to move Toronto toward becoming a more livable, affordable and functional city,” said Mayor John Tory. “Jennifer has used her platform and voice as chief planner to help guide council’s efforts to build a better city for all Torontonians and I wish her all the best in the next phase of her career.”

Keesmaat’s role with the city was her first foray into public service. Prior to joining the city, she was a principal at design firm Dialog and had a distinguished career as a planning consultant and strategic planner. Her career took her to international projects in the United States, Ireland and Greece as well as across Canada.

“I would like to extend my thanks to Jennifer for her leadership of the City Planning Division as well as her contributions to my senior management team,” said Deputy City Manager John Livey. “Jennifer is a strong and forthright proponent of complete communities, cross-sector collaboration and public consultation on every project she undertakes, which has helped achieve broad support for many of the City’s major infrastructure projects.”

“It’s been an honour to work with Mayor Tory, council, city staff and my remarkable team in the city planning division over the last five years,” said Keesmaat. “I promised myself that after five years in public service I would review my future options. I look forward to new challenges in the important business of city building now enriched by invaluable lessons, new friends and colleagues acquired while serving the people of our great city, Toronto.”

Toronto is Canada’s largest city, the fourth largest in North America, and home to a diverse population of about 2.8 million people. It is a global centre for business, finance, arts and culture and is consistently ranked one of the world’s most livable cities. In 2017, Toronto is honouring Canada’s 150th birthday with “TO Canada with Love,” a year-long program of celebrations, commemorations and exhibitions.

Previous: Proper dose of cholesterol-lowering drugs?
Next: Why young Canadians can’t afford to buy a home

Bentway visionaries get a Key to the City