Posted by: Bulletin Editor December 15, 2015 Comments Off on Canary District gets design competition

The rapidly evolving Canary District and the potential for improved Waterfront transit were hot topics at the West Don Lands Committee (WDLC) meeting on Oct. 26.

Developer Dundee Kilmer’s Peter Zimmerman provided an enthusiastic update on the state of the Canary District. The site developed for the Pan Am Athlete’s Village was particularly noteworthy as it moves towards completion.

“We’ve all worked hard for a number of years and I think people were pretty proud of what happened,” said Zimmerman, “We’re now reconfiguring those buildings for their final purposes.”

Dundee Kilmer is tearing out the dormitories initially built for the athletes and will use the “shell” as a vessel for apartments, some of which have already been sold. The village is still fenced in due to construction, but according to Zimmerman, work is progressing quickly and the building will likely be in use as early as April 2016.

After the conversion, the district development will focus on three key development blocks that will include 1,100 new condos and approximately 20,000 square feet of retail. Block 13, the segment at Mill and Bayview that faces Corktown Common Park, is of particular interest as its design is not yet set in stone.

“We intend to hold a design competition to select the architects to design that site,” said Zimmerman, “It’s going to be the most significant building in the second phase of development. It’s an important part of the project and we want to make sure that it’s something very special.”

An executive committee report on revitalizing waterfront transit was discussed.

“Although there are very significant priorities for transit, none of them are funded,” said WDLC co-chair Cynthia Wilkey. “By creating a more comprehensive view of transit requirements in relation to population growth and development, the city will be able to come up with a strategy.” 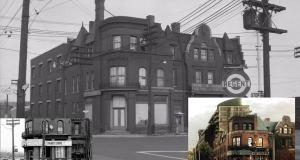 Defunct Canary Restaurant inspired the name of a district