The Bulletin goes electronic for 2017 & beyond

Good riddance, 2016! You’ve been a tumultuous year, 2016, and since this New Year number ends in 7, we can hope it lives up to its reputation as a bearer of good luck.

For The Bulletin, November 2016 was the final month we printed a newspaper. From now on, The Bulletin remains “in The Cloud,” available here online at www.thebulletin.ca.

With the exception of one November in 2010, The Bulletin has been regularly printed each month since 1998 when it made its first appearance as the St. Lawrence Neighbourhood Community Bulletin. The name change to The Bulletin came a few years later as our popularity grew in other Downtown neighbourhoods and our mailed circulation soared to 50,000 each month.

The economy was strong in those early years. It easily supported our expansion and The Bulletin was immensely profitable. But 2007 saw the start of this current economic depression which began to erode retail sales in the following year and thus our advertising clients were more frugal. And the postal rates were rising.

The printed media are very likely doomed as the economy continues to hurt advertisers who can’t afford to promote themselves as in the past. Newspapers and magazines are trimming their printing and delivery costs and leaning heavily on their websites and other electronic outlets to deliver editorial content. Website ads are increasing, they’re quite cheap and offer the advantage of linking to an advertiser’s website to bring potential customers right into their electronic front doors.

The Bulletin’s website has been active since 2001 and our plan is to continue to serve Downtown readers and advertisers at www.thebulletin.ca. We are developing solid new ways of serving our substantial array of online readers. For local advertisers it means they can promote their businesses at prices they can’t afford not to take advantage of. 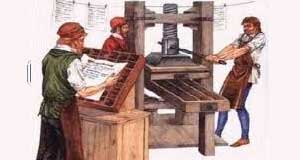 Are printing presses for newspapers and magazines the next buggy whip?

The industries that are going the way of the buggy whip, I’m sad to say, are quite likely news web printing presses and many paper mills. There will always be a need for paper, but not so much for printed reading material. Pens and pencils are almost dinosaurs as today’s schoolchildren who cautiously wield a writing instrument find it easier to print words instead of using “cursive.”

It’s a bold new world for those of us who became computer literate in our 40s when “personal computers” were using DOS and the “backslash” was invented to widen its language. See also http://bit.ly/2ijRdKh

I could go on, but if you’re still with me this far:

Happy New Year! Here’s to a prosperous and healthy 2017 and beyond!