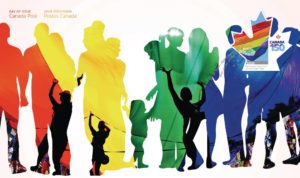 The 519 and Canada Post unveiled a stamp commemorating the 2005 passage of the Civil Marriage Act, which made marriage equality the law throughout Canada, on May 9. Grassroots activists, government officials and community members attended the unveiling, catching the first glimpse of the new stamp, which features the iconic rainbow symbol.

The unveiling was held at and in partnership with The 519, a City of Toronto agency committed to the health, happiness and full participation of LGBTQ communities.

The marriage equality stamp is the fourth in a set of 10 that Canada Post is issuing to celebrate Canada’s 150th year since Confederation. Collectively the stamps highlight historic moments that have taken place in our nation over the past 50 years. Canada Post’s stamp advisory committee, which includes historians, collectors and artists, selected these 10 milestones that together have helped shape the story of Canada.

The road to the legislation

Twelve years ago, on February 1, 2005, the Civil Marriage Act was introduced in Parliament as Bill C-38. After it was passed in the House of Commons and then in the Senate, the bill received Royal Assent on July 20, 2005, and marriage equality officially became the law.

But the road to achieving marriage equality in Canada began long before 2005. For decades, LGBTQ activists and supporters from coast to coast to coast had fought for the rights of their communities, including the right to marry. In the late 1990s, the community began to achieve significant victories.

For instance, in 1996, the federal government passed Bill C-33 adding sexual orientation to the Canadian Human Rights Act; three years later, the Supreme Court of Canada ruled that same-sex couples should have the same benefits and obligations as opposite-sex common-law couples from social programs that they contribute to. A year later, Parliament passed Bill C-23 that made the Court ruling law.

In early 2001, the battle for the right to marry took centre stage, after Reverend Brent Hawkes married two same-sex couples in a ceremony in Toronto. When the City refused to issue marriage licenses for these unions, it set off a series of heated court battles and public debate. The legal challenges culminated on June 10, 2003, when the Ontario Court of Appeal upheld a lower court ruling that prohibiting same-sex couples from marrying was a violation of the Charter of Rights and Freedoms. Within hours of the decision, Michael Leshner and Michael Stark were married in Toronto, the first same-sex couple to wed after the legislation.

Similar court battles were also taking place in provinces across the country, and more provincial courts issued rulings legalizing marriage equality: B.C. in July 2003, followed by Quebec, Manitoba, and Nova Scotia in 2004. Finally, on July 20, 2005, the government of Canada passed the federal legislation that legalized marriage equality across the country, making Canada the fourth country in the world and the first outside of Europe to grant same-sex couples the right to marry the one they loved.

Today, with support continuing to grow across the globe, more than 20 countries have legalized same‑sex marriage on the national level. To hear more from LGBTQ community members and activists about this fight for equality, please visit canadapost.ca/canada150. To learn more about the work of The 519, please visit www.The519.org.

The next stamp in the Canada 150 set will be unveiled in Regina on May 16. The remaining stamps will be revealed individually at cities across the country, the last of them on June 1.