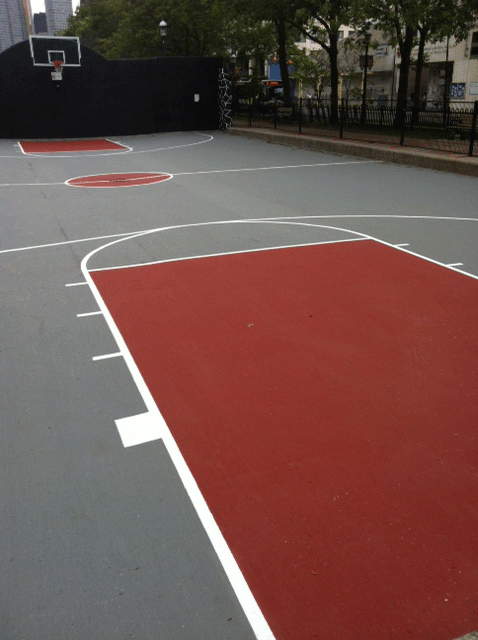 On June 18, this renewed court will be ready for play, much to the delight of St. Lawrence Neighbourhood young people — Paulette Touby

The final stage of the renovation of the St. Lawrence Neighbourhood basketball court repair work is completed with the unwrapping of the revatilized mural on the basketb all court. 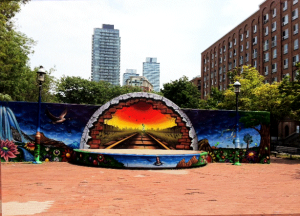 Everyone agrees it’s spactacular and highly creative, like the court itself and the local young people who use it.

The magnificent basketball court that has for years been the pride and joy of so many St. Lawrence Neighbourhood young people has been replaced.

The glorious basketball court on The Esplanade across from the St. Lawrence Rec Centre  was, in effect, “vandalized” by a thoughtless cop chasing a kid on a bicycle.

The court was tiled with special materials that not only reduced the sound of bouncing balls to adjoining co-op and condo residents but also came close to big-league-quality surfaces and also went easy on the basketballs which can get torn up on concrete surfaces. 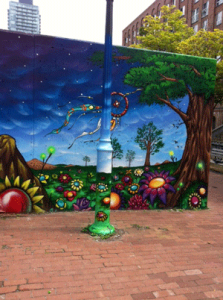 Now it’s back and will be ready for play June 18. The newly installed special court tiles need time to set so the court is fenced off until then.

It was provided as a community service by Maple Leaf Sports & Entertainment, which has picked up the tab for the re-installation of the court. MLSE will pay whatever it takes to get the job done, not balking at suggestions $50 million is not out of the question. The Harbourfront Recreation Centre surface of different material cost $26 million.

The work had to wait until June because good weather is critical to the success of the installation.

Toronto police will also kick in an undisclosed amount to restore the outdoor court and compensate the community.

Because of the unique situation, MLSE is going to make the replacement,” promised a spokeswoman, without regard to how much or how little cash city police may contribute. A lot of the police “compensation” might come in the form of new or enlarged programs sponsored by 51 Division.

We’ll get back to you on what 51 proposes in that regard.