Posted by: Bulletin Editor January 25, 2017 Comments Off on 11-year-old Melvin: self-decribed ‘fighter for my family’ 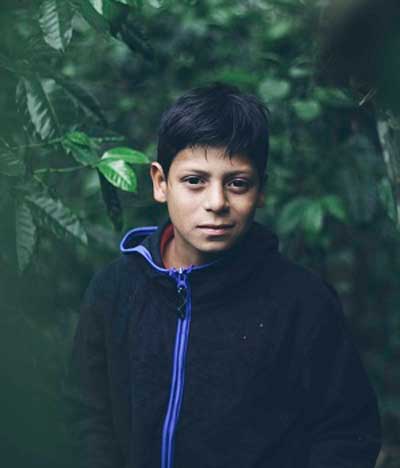 Melvin, age 11, is on the financial front line for his family of 8.

Meet Melvin. He’s only 11, but he says he can’t remember the last time he played as a child. As a worker on a coffee farm, Melvin let go of childhood a long time ago.

“Children who are forced to work lose their childhood,” he tells me when I ask him about the games he likes to play. “And for some, losing a childhood can be like losing a life.”

I met Melvin at the beginning of the coffee harvest in Honduras, which means that for the next four months (November-March) he would embark on12-hour days to pick enough coffee to earn sufficient money to sustain his family for the whole year. Melvin’s father was killed when he was a baby, which is why at age 7, Melvin stepped up to be the breadwinner of his family of 8.

“Back then, it was more difficult to cut coffee because my hands were not tough,” he says. “But now they are used to it and I can cut up to 5 gallons a day.” For that, Melvin can earn up to $8.

Sadly, child labour is as much embedded in the culture of Honduras as drinking coffee is embedded in ours. As Canadians, we actually consume more coffee than any other beverage — 2.5 times more than water! But for something that we drink multiple times a day, we don’t know much about how it gets to Canada.

What we do know is that growth in imports of coffee to Canada outpaces Europe and even the U.S.. And that Honduras ranks sixth on the list of countries Canada imports coffee from.

Does that mean that the coffee picked by Melvin is making its way into our local stores and coffee shops? We don’t know. We don’t know because coffee companies don’t need to tell us where their beans come from, or who picked them. Until companies are made to expose their supply chains, we have no idea whether we’re fueling child labour or not.

At World Vision, we’re advocating for this to change. In the U.K. and parts of the U.S., laws have been passed that require companies to report on their supply chains in an effort to reduce child labour. We’re asking the Government of Canada to do the same. With 168 million children engaged in child labour worldwide, we think that companies need to outline the steps they are taking to reduce child and forced labour in their supply chains.

Something you can do

Melvin described himself as a ‘fighter for his family.’ We want you to join us in being a fighter with him.

By signing and sharing our supply chain petition , you can help us get 168 thousand signatures from Canadians in solidarity with the 168 million children, who like Melvin, sacrifice their childhood daily for others. We’ve already acquired 144 000 actions in support of supply chain legislation, and are delivering these to government this year.

Please sign and share the petition. Tell our leaders you want companies to ensure their business practices support a world where children like Melvin have a chance to play and learn, and to develop into their full potential.