Wellington was once our notorious red-light district

Posted by: Bulletin Editor September 23, 2014 Comments Off on Wellington was once our notorious red-light district

One of my favorite row of buildings is the Hutchison Block, a lovely yet unadorned grouping of buildings on the north side of Wellington just east of Leader Lane across from Berczy Park.

It is also one of the oldest structures still standing in Toronto. Over the past 150 years it has been home to a wide variety of businesses.

Around 1800, when we were still known as the Town of York, the centre of town was at Frederick and King.

Church Street was considered the outskirts of the town and Wellington Street, then called Market Street, was an access road for farmers coming into the town to sell their produce at the Market.

The only other reason to come out this far was to visit Coopers Wharf, the first commercial pier of early York that lay at the foot of Church Street just south of Front.

The wharf was where you collected your mail and said good-bye to old friends as they set sail to far-flung shores. It also held the first general store in York.

In 1845 Russell Inglis built the Wellington Hotel on the northwest corner of Front and Church (now the Works). Next to the hotel was the notorious Henrietta Lane that once ran from Wellington up to Colborne Street where Gooderham Court condo now stands.

It was notorious because the street had distinction of being the red-light district of early York, lined with brothels, and ground zero for the first cholera epidemics in the 1830s.

Cholera or not, Inglis’s hotel prospered and the so-called Coffin Block (the predecessor to the Flatiron building) across the street was annexed to the main hotel where the lower level served as the main stationhouse for the William Weller Stagecoach Company.

Next to Henrietta Lane was John Grantham’s livery stable and behind that in the Big Field, as it was known (now Colbourne Street), it became the winter quarters of George Bernard’s Circus. 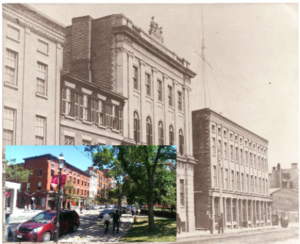 Historic Hutchison block still remains across from St. James’ Park as a reminder of pioneer retailer John Hutchison and his faith in Toronto.

By the time the 1850s  finally rolled around, the entire north side of Wellington no longer resembled the wild west due to the fact that the railroad—that great marvel of Victorian Industrialism—was on its way to Toronto and with it rode the promise of a huge economic boom. In 1854 John Hutchison, a successful dry goods merchant, realizing that he too wanted a part of this new economy, constructed a row of buildings on Wellington Street that he named for himself.

In 1857 Hutchison, after serving as a city councillor, becomes Mayor of Toronto during the worst economic crash to hit our city up to that date when the bottom fell out after too many people speculated on railroad stock.

During the depression of 1857 Hutchison resigned from office stating that after his Wellington Street business failed he could no longer lead the city.

There also was a hint of scandal, for people were whispering that because of his directorship in the Toronto and Sarnia Railroad Co., Hutchison was going to personally gain from the land grants given over to the railroads. He left the province, went to Montreal and died five years later.

The north side of Wellington, between Church and Leader Lane, survived the crash of ’57 and went on to be, by the end of the19th century, the financial core of late 19th century Toronto where industrial giants like George Gooderham built enormous fortunes. Toronto’s first great stock exchange building was constructed just west of Leader Lane where the fountain stands in Berczy Park. It was the opulent Royal Bank of Canada building.

In the middle of this new financial core and surrounded by lavish palaces to commerce stood the unadorned Hutchison block. From 1867 to at least 1893 the first floor and basement of the Hutchison was home to Samuel Trees and Co., makers of saddlery hardware.

Samuel was a first-class leather maker who manufactured anything to do with the horse and buggy trade. He produced whips, blankets, carriage robes, brushes, chains and linen horse covers.

However, as the horse was slowly giving way to the automobile by the beginning of the 20th century, half of the Hutchison Block became the Bodgas Hotel.

During the wild 1920s and depressed ‘30s the area around Church and Wellington—first a wholesale district, then the financial core—reverted back to its wholesale roots with most of the buildings being converted into warehouse space.

By the 1940s the area started to decay and eventually was headed for total annihilation. Entire city blocks were bulldozed over, including the land where Berczy Park now sits as well as the north and south sides of Wellington where once warehouses, banks, stores and hotels.

Toronto demolished 25,000 buildings between 1955 and 1975 to make way for a more modern city and all that magnificent history that once was Wellington Street was now gone. However a few treasures like the Hutchison Block thankfully remain.

2014-09-23
Bulletin Editor
Previous: Serra
Next: A talk about St. Lawrence Neighbourhood, its past, present, future