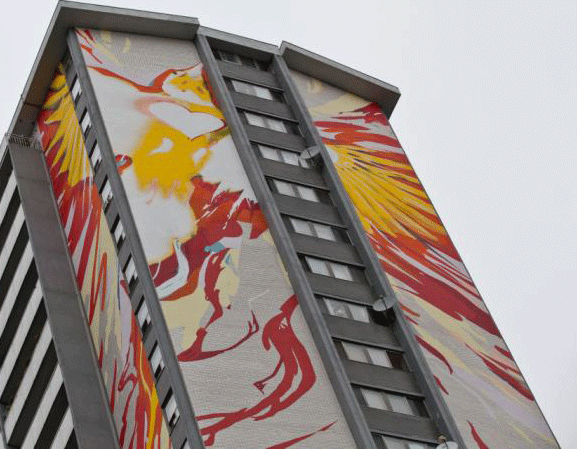 The STEPS (Sustainable Thinking and Expression on Public Spaces) Initiative, alongside its partner the St. James Town Community Corner, hosted an unveiling event to celebrate the completion of the world’s tallest mural on Toronto Community Housing property, 200 Wellesley Street East. This community-led art installation that stands approximately 32 stories high has involved hundreds of community members, and is soon to be crowned the tallest mural in the world by the Guinness Book of World Records.

The mural’s design incorporates the motif of a bird soaring up, emblematic of a phoenix rising, to counter the negative stereotypes associated with St. James Town, alongside designs that represent themes of diversity, accessibility, local culture, safety and happiness weaved into its lower sections. Local artist and 200 Wellesley Street resident, George McIntyre says “I have never seen so many people stop by and look at our building.”

The mural is the culmination of STEPS’ Emerging ARTivist Program, been taking place in St. James Town over the last year. Over 50 young people from the St. James Town community and hundreds of community members have been involved in the project in various ways. Internationally renowned local artist, Sean Martindale worked with community members of all ages to help develop the mural’s design as the lead artistic facilitator. Dora, a 200 Wellesley tenant who has added her own designs onto the mural, says that it has been a pleasure to take part in this project and be recognized for it by her neighbours, “Everyone who sees my sunflowers tells me how much they like them!” Numerous other residents have shown immeasurable support, saying that the mural is “the best thing that’s happened here,” and that it has given the community a “brand new look.”

Local officials have also been very supportive. “Congratulations to everyone involved in this exciting project that will add vibrancy to the Wellesley community”, says Mayor Rob Ford. “Beautification of our public spaces is an essential component of building and maintaining healthy communities,” said Councillor Pam McConnell (Ward 28, Toronto Centre – Rosedale).  “This spectacular mural is a shining example of the resiliency and creativity of the young people of St. James Town, and stands as a beacon of pride in their community on display for all of Toronto to enjoy.”

The building, which possesses a complicated history, is located near a busy intersection that sees a high volume of car, transit, cycling and pedestrian traffic – is currently unmemorable and often difficult for residents and users of the Community Corner (an agency on its main floor) to find.  The mural is already turning the building into a celebrated local landmark since it is visible from many tall buildings across Toronto’s downtown core (a rare occurrence for the City’s street art, which tends to be located at ground level). Jason Rouleau and Ryan Dineen of the Toronto Muralists painted the mural’s upper sections.

Celebrations of the unveiling were part of the St. James Town Festival Sept. 28, in the space in front of 200 Wellesley E.

The project was primarily funded by StreetARToronto (or StART); a new, pro-active City of Toronto program that aims to develop, support, promote and increase awareness of street art and its role in adding beauty and character to Toronto neighbourhoods, while counteracting graffiti vandalism and its harmful effect on communities. Additional resources have come from the Ontario Arts Council, the Ontario Trillium Foundation, ING DIRECT, Toronto Community Housing and in-kind contributions from the STEPS Initiative as well as local businesses like Dulux Paints, Skyway Canada, Modu-Loc, Joe Huffers Paint Shop and Hello Foto. Food donations for the event have been provided by Loblaws.

STEPS is an organization promoting the use of art to connect people with public spaces. STEPS seeks to challenge and change the ways in which public spaces are currently being used, how citizens communicate on environmental issues and the role of the artist in community development.  STEPS and its Emerging ARTivist Program in St. James Town are supported by the City of Toronto’s Identify ‘N Impact, StreetARToronto, and Live Arts Programs; the Ontario Arts Council; the Ontario Trillium Foundation; the Laidlaw Foundation and ING DIRECT. The STEPS Initiative is an incubated project of the Centre for Social Innovation (CSI), who generously provide a wealth of in-kind supports to the organization.