Posted by: Bulletin Editor June 17, 2015 Comments Off on Traffic impacts begin for Pan Am/Parapan Am Games

From the Financial District BIA — The Pan Am/Parapan Am Games will be hosted from July 10 to August 15 across the Greater Toronto and Hamilton Area. The first impacts have already begun with the HOV lanes in the region installed and being tested.

Official sources of information can be found at the Pan Am portal for transit, driving and traffic routes, including travelling tips and traffic change summaries for different areas of the GTHA. Detailed maps of the HOV Lanes and Games Route Network suggested for staff and participants of the Games can be found for Pan Am Games, July 10-26, and Parapan Am Games, August 7-15.

TICKETS for Pan Am/Parapan Am events are available at http://www.toronto2015.org/tickets. Public transit (GO Transit and TTC) are included with tickets and children’s tickets are available for half price.

EVENTS IN THE FINANCIAL DISTRICT during the Games period will include PANAMANIA at Nathan Philips Square and Young World Faces of Pan Am at Commerce Court. 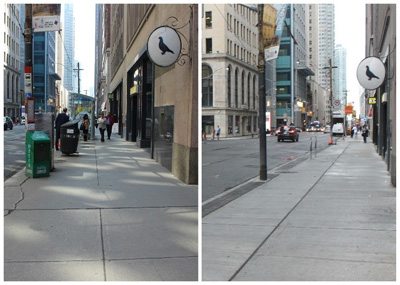 Reconstruction of sidewalks and repaving on Bay Street from Queen Street to Lake Shore Boulevard is nearing completion.

Sidewalk upgrades include more bike parking and implementing the highest City standard for sidewalks to establish a consistent sidewalk treatment where there was previously a hodgepodge of standards.

All work is being completed at night so that business operations and workers’ commutes are not affected. 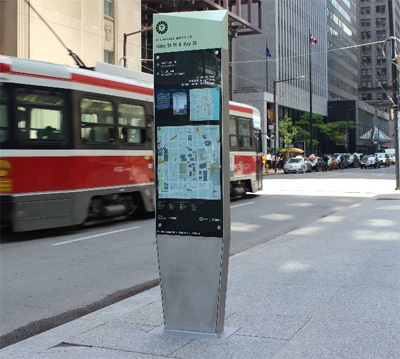 New wayfinding signage in the area

New wayfinding signage is being rolled out in the Financial District in advance of the Pan Am Games.

A total of 16 totems will be installed that will include improved identification of PATH entrances and have an easy-to-use interface showing the walking times to get to area landmarks.

The TTC will be installing 38 updated transit shelter maps as a part of the pilot.

This pilot project will be evaluated and the City of Toronto expects to expand the wayfinding program to other neighbourhoods in coming years.