As former Toronto Zoo elephants Thika, Toka and Iringa begin their new lives in California, the President of the Union representing Zoo workers is urging 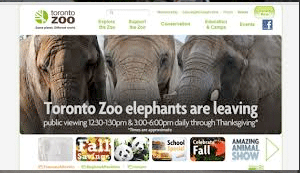 “Obviously, we’re relieved and happy that the elephants have arrived safely and we hope with all of our hearts that they have a long and healthy future,” said Christine McKenzie, President of Local 1600 of the Canadian Union of Public Employees (CUPE 1600).

“Our members and especially any zookeeper who had the opportunity to work with these wonderful animals, are a little broken-hearted right now. We’ve grown very close to them over the years,” she added.

McKenzie urged all parties to recommit themselves to restoring the Toronto Zoo’s accreditation and to the Zoo’s long-term missions of conservation, education and research.

“Throughout this long, difficult process, many accusations have been leveled against keepers, veterinarians and staff at the Toronto Zoo. We hope people know the staff of this great, public institution are some of the most dedicated and selfless, and undeserving of some of the attacks and accusation leveled against them, which bordered on slanderous,” said McKenzie.

“Every action taken by the Zoo since City Council first involved itself with the elephants has been solely out of care and concern for their well-being,” she added.

Moving forward, McKenzie said she and fellow CUPE 1600 members will “continue on with our heads held high and focus on the important conservation, education and research we do here, and even more importantly, to the work of inspiring a new generation of true animal activists.”

2013-10-22
Bulletin Editor
Previous: Trashing the Gardiner Expressway is a garbage idea
Next: Autumn and winter painting tips for homes and apartments