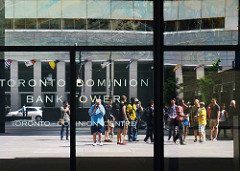 The workshop group in front of the Toronto-Dominion Centre on the very sunny afternoon.

More than 40 photographers gathered at the Starbucks at Yonge and King to begin a workshop on street photography—defined as “grab shots” of city people and places which capture local atmosphere.

The group managed to get as far as Metro Hall by the end of the two-hour workshop. Hundreds of photographs were taken of the bank buildings, St. Andrew’s Church, Roy Thompson Hall, Metro Hall and everything in between. Some of the photographs can be seen at the festival’s Facebook page: http://www.facebook.com/TorontoUPF/photos.