Posted by: Bulletin Editor March 21, 2011 Comments Off on Toronto Police misbehaviour is rampant 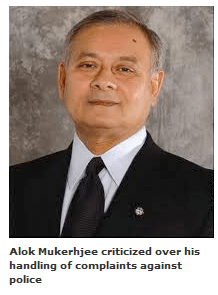 This Bulletin is published by the Toronto Police Accountability Coalition, a group of individuals and organizations in Toronto interested in police policies and procedures, and in making police more accountable to the community they are committed to serving.

a) Breach of the Peace

b) The Board’s review

2. Trying to get strip searches on the public agenda

a) Breach of the Peace

The Canadian Civil Liberties Association followed up their November public hearings on the events of the G20 meeting in Toronto in later June, with a remarkable report “Breach of the Peace” issued in February. It is jointly produced with the National Union of Public and General Employees.

This report concludes that constitutional guarantees do matter; that the planning and delivery of security during the G20 failed to meet Charter standards; that the police created an atmosphere of intimidation and breached the rights of many people. It ends with eight strong recommendations, including the need for a public inquiry. Here, for example, is one of the many powerful statements in the report:

“Hundreds of persons were arrested for breach of the peace, including individuals who were peacefully protesting, reporting on the G20, or simply walking on the streets. The fact that so many of these people were either not charged or have since had the charges against them dismissed, dropped or stayed, appears to indicate the arrests were made without a reasonable basis. Unwarranted detentions and arrests are a clear violation of Charter protections. They are also a violation of comparable protections under international law that require police to ensure that the right of persons to peacefully participate in social protests is respected, and ensure only those committing criminal offences during demonstrations are arrested.

“Unwarranted criminal charges can also result in the significant stigmatization of individuals who may have done nothing wrong. Even if the charges against such individuals are withdrawn outright, they may haunt the affected individual for many years, as certain police background check processes can reveal criminal charges even if a conviction is not entered. This is an issue of great concern to NUPGE and the CCLA. The CCLA has written to the TPS to request the removal of all G20-related charges that do not result in convictions from background check databases. The TPS has refused to grant this request. (Page 43.)”

At the March 3 meeting of the Toronto Police Services Board, TPAC raised this last point – about removing G20-related charges from background check data bases – but no Board member was willing to address the matter.

A full copy of the report is available here. .

b) The Board’s review

At the March Board meeting the chair of the Board reported on the status of the review of G20 events. You will remember that the review was authorized on July
6;  on Sept. 23 former judge John W. Morden was retained to do the review.

As the chair reported, many of the preliminary steps have been taken, but as of the March meeting, Mr. Morden had yet to interview any of the people involved in the G20. We are eight months from the event, and no one has been talked to. A mechanism to involve the public has been promised, but has yet to be forthcoming.

Of course, since none of the interviews will be public and none are under oath, who knows where they will go or how long they will take. It’s fair to say that it is most unlikely that Mr. Morden’s report will be available before the October provincial election, and certainly not before the federal election expected to be called momentarily. It is an expense way of producing a document so far from the event that one expects it will have little positive impact on policing in Toronto or Canada.

But the review does have a perverse use: Premier Dalton McGuinty said that because the review was under way there was no need to have an inquiry.

2.  Trying to get strip searches on the public agenda

TPAC has serious concern about Toronto Police Service strip search policies and procedures. TPAC believes that the Toronto police strip search about half (or more) of the individuals they arrest, and that they are therefore making a mockery of the 2001 Supreme Court of Canada decision which said that strip searches should not be routine.

TPAC wrote to the Toronto Police Services Board in early February asking to be listed on the March 3 agenda of the Board to address the question of strip searches.  We attached the current strip search policy used by the Toronto police, and proposed changes that would ensure such searches did not happen so frequently.

The chair of the Board, Alok Mukerhjee, refused to put the TPAC letter on the agenda, “as the issue of search of persons procedure is not before the Board at this time.”

We responded by pointing out that in January we had filed a Freedom of Information request with the Toronto Police to secure a copy of the strip search policy and were informed it was “available on our web site under the heading ‘Procedure Information.’” That indeed was the policy we used in our letter. Could Mr. Mukherjee forward to us the different policy he was referring to?

No, he wouldn’t provide that policy. Instead he said “the police services policy regarding Search of Persons fall[s] within the purview of the Chief of Police,” and washed his hands of the matter by referring our letter to the Chief.

So on this issue, the chair of the Board that is supposed to represent the public interest in policing matters, is obfuscating and confusing the matter. On the one hand he claims to know the issue so intimately that he can offer his opinion that the policy and procedure conforms to the court decision; on the other hand he contradicts the Freedom of Information officer and then refuses to provide a copy of the alternative policy which he thinks is in place.

It gets worse. The Procedural Bylaw of the Board  go here, click on “Agenda” on the upper right and you’ll find the tab for the Bylaw at the bottom right. It is pretty clear that any member of the public who asks to appear before the Board will be permitted to, providing five days notice is given before the meeting. That is set out in Rule 30 which states “any person may, either on his or her own behalf or as a representative of an organization or group, appear at any public meeting of the Board and address the Board with respect to any matter relating to policing under consideration by it or being raised for consideration by such person.”

Nowhere in the rules does it say the chair can prevent individuals from speaking if they have given the appropriate notice. Perhaps Mr. Mukherjee has a different set of rules which, like the strip search policy, he keeps from public view.

It is difficult to understand why the chair of the Board has taken these positions. Given the bad publicity when it was revealed in a court room that Ottawa police officers had wrongfully strip searched a young woman, Stacy Bonds, (see  posting for Oct. 25, 2010) one would think the chair would be moved to ensure that the procedure followed in Toronto was appropriate.

The chief had a report before the February Board meeting about buying 52 CCTV cameras at a discount as materiel left over from the G20. Like many others, TPAC assumed that the chief was asking for approval for the discount purchase, but we were wrong – he was simply reporting that he had already acquired the cameras.

The last time the issue of cameras was before the Board was on March 30, 2009, when the police were trying to get approval to use them more extensively.  The Board had before it a memorandum from Professor Rosemary Gartner of the Centre of Criminology, University of Toronto, which carefully reviewed the 100 page police report summarizing evidence purporting to show that cameras were effective. Prof. Gartner concluded that the data did not support a finding that calls for service had been reduced in areas where cameras were mounted. In cases where there were reductions, she said they could not be distinguished from reductions that would occur by chance. She wrote “I would conclude there is no strong or consistent evidence that the presence of CCTV reduces calls for service.”

At that meeting, the Board decided not to approve continuation of the CCTV program until a further report was available responding to Prof. Gartner’s criticisms. The Board stated that the chief’s report should respond to the following questions:

1) What impact does CCTV have on crime reduction in the three areas?
2) Does CCTV reduce crime or diffuse and disperse crime?
3) Is CCTV effective only when there is real time monitoring?
4) What factors improve the evidentiary value of data from CCTV?
5) Does the presence of CCTV have any impact on a community’s feeling of safety?

This report has never been presented to the Board. Apparently the chief – and the Board – simply ignored the requested report and went ahead with an expansion of CCTVs in Toronto.  The request for the report asked good and critical questions, but they will not be answered by this policing operation.

In 2010, the Toronto police used the taser in 210 incidents. In 95 cases the taser was simply displayed; in the other cases it was fired. 92 of the subjects were thought to be “emotionally disturbed persons,” to use the police jargon. Three minor injuries resulted from taser use – all three being cuts to the face as the subject fell to the ground.

The Toronto Star has written many articles about the Special Investigations Unit in recent months. Last fall there was a series about astounding things the police had done to innocent people that the SIU found no fault with.

At that time it concluded: “In its 20-year history, the SIU has conducted at least 3,400 investigations and laid criminal charges after only 95 of them, according to a Star analysis. The SIU does not track what happens to those it charges. But the Star has, and found only 16 officers have been convicted of a crime. Only three have seen the inside of a jail – as inmates.” (Toronto Star, October 28, 2010.)

More recently (Feb. 22, 2011) The Star reported that “police forces across Ontario are thumbing their noses at the provincial agency that investigates cops.” It noted that the SIU had sent 300 letters over a 14-month period starting January 2009, and as Ian Scott, the director of the SIU says, “Typically I don’t get responses.” Scott noted that some police services are good at responding, noting Hamilton, York, and South Simcoe. Toronto appears not to be one of the forces that regularly responds to SIU letters.

This is not a matter of individuals brushing aside a letter asking questions – it is a publicly funded organization ignoring an agency charged with public oversight. It seems as though too many police forces have incorporated into their operations a regular practise of ignoring civilian oversight.