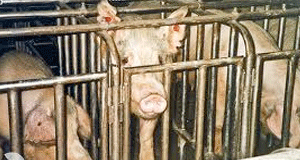 On Sunday Sept. 29, local animal rights activists from Toronto Pig Save, along with U.S.-based nonprofit Farm Animal Rights Movement (FARM), were at Quality Meat Packers in Toronto to protest the brutalization and killing of pigs. The protest was part of World Day for Farmed Animals, a co-ordinated, targeted series of demonstrations at slaughterhouses and other animal agriculturefacilities around the world to oppose the abuses inherent in animal agriculture.

Scores of activists peacefully gathered at 677 Wellington Street West . to inform the public about the tragedy happening just inside. Activists will create a human chain around the slaughterhouse from the Wellington address (where pigs arrive) to 2 Tecumseth (where refrigerated trucks leave). Recent photos taken of the animal victims will be displayed, some by noted photographer Jo-Anne McArthur, the subject of the acclaimed new documentary film The Ghosts in Our Machine. Activists will also stage a “die-in” in front, and show video footage taken inside the facility on a 32-inch screen.

“This protest memorializes and speaks out for animals who are brutally killed at Quality Meat Packers slaughterhouse,” said area resident Anita Kranjc, who is organizing the event. “On World Day for Farmed Animals, we intend to tell the public that all animals raised for food face a gruesome slaughter and deserve our respect.”

In addition to Toronto, protests were be held in more than 100 North American locations including Washington, DC at the U.S. Department of Agriculture’s building, and at slaughterhouses in Brooklyn NY, Los Angeles CA, Chicago IL, Milwaukee WI, Milford DE, and San Diego CA. In Canada, FARM is organizing protests in Vancouver BC, Burlington ON, Maidstone ON, Breslau ON, and Lethbridge AB. Demonstrations are scheduled in several other countries, including England, Spain, Chile, India, and Israel.

“There are 65 billion farmed land animals killed for food every year, who are confined, mutilated, and bred to grow so large, so quickly, that many of them literally suffer to death,” said Michael Webermann, FARM executive director. “Each year, World Day for Farmed Animals seeks to expose the public to the shocking truth of animal agribusiness, and companies like Quality Meat Packers slaughterhouse must be held accountable.”

This year marks the 30th year World Day for Farmed Animals has been observed. The international day of action typically includes vigils, marches, and demonstrations, and takes place each year on or around October 2 in conjunction with the birthday of Mahatma Gandhi, an outspoken advocate of non-violence towards animals.

“The greatness of a nation and its moral progress can be judged by the way in which its animals are treated,” Gandhi famously said. For more information

Farm Animal Rights Movement (FARM) is a 501(c)(3) national nonprofit organization working to end the use of animals for food through public education and grassroots activism. FARM believes in the inherent self-worth of animals, as well as environmental protection and enhanced public health. The organization is based in Bethesda, Md., and works through a volunteer network in all 50 U.S. states and two dozen other countries. For more than 30 years, as FARM has grown, so has public awareness of farmed animal abuse and the benefits of veganism. For more information