Toronto Real Estate Board President Paul Etherington announced that Greater Toronto REALTORS(R) reported 92,867 residential sales through the TorontoMLS system in 2014, including 4,446 in December. 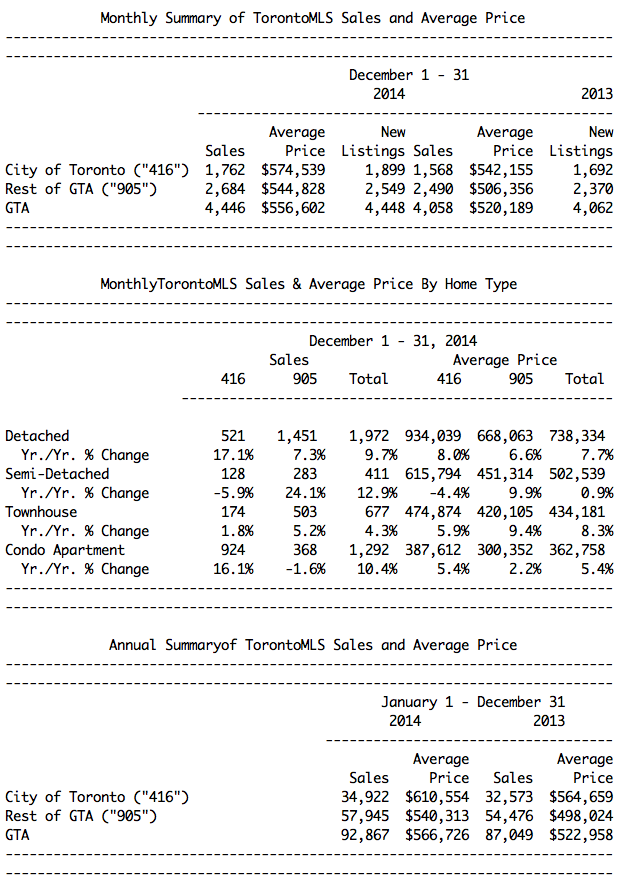 “TREB’s 2014 sales figures are a testament to the importance Greater Toronto Area households continue to place on home ownership. GTA households realize that home purchases have been a quality long-term investment.

While home prices certainly increased substantially in 2014, the purchase of an average priced home remained affordable, in terms of the average household’s ability to comfortably cover their monthly mortgage payments,” said Mr. Etherington.

Throughout 2014, annual increases in the average selling price and the MLS(R) HPI Composite Benchmark were consistently reported on a monthly basis for most market segments, from detached homes through to condominium apartments.

“The strong price growth we experienced in 2014 can be explained with two words: listings shortage. The constrained supply of listings was especially evident for low-rise home types like singles, semis and town houses.

The number of households looking to purchase these home types increased, while the number of homes from which they could choose decreased. This situation resulted in more competition between buyers and more aggressive offers,” said Jason Mercer, TREB’s Director of Market Analysis.

2014-12-08
Bulletin Editor
Previous: 9 good reasons why we need public review of a Bruce Nuclear deal
Next: Preparing a house to secure a sale