Toronto city councillors voted unanimously on April 1 to go a step further in the process of authorizing Porter Airlines to offer whisper jet access to the city’s waterfront airport.

“Both sides broke out in spontaneous applause at the unanimous vote, never before seen at city hall,” Deputy Mayor Norm Kelly was quoted as saying. “That’s quite a feat for a newly minted deputy mayor.”

Indeed, the turn around in support for whisper jets among councillors is impressive. Porter Airline’s plans for new Bombardier CS100 whisper jets to operate from an upgraded Billy Bishop airport faced some tough opposition as recently as March 25 during public hearings into the issue. Not only a few local residents and a number of NoJetsTO lobbyists were opposed. So too were a number of Toronto’s decision makers.

The breakthrough in council support can be traced directly to a single surprise moment. It all turned around when a political bridge was built at the last minute between Deputy Mayor Kelly, who supports the proposed service, and Councillor Pam McConnell, one of the plans harshest critics. As Kelly spoke in support of the service before the vote, he added that another city councillor would be proposing a special amendment to the proposal authorizing the City of Toronto to negotiate the necessary amendments to the Tripartite agreement governing Billy Bishop airport with the other parties involved, including the Toronto Port Authority and Transport Canada. 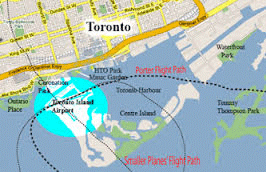 Councillors were visibly and audibly stunned when Councillor McConnell rose to announce that it was she who was proposing the amendment in concert with Kelly, because it was this amendment more than any other factor that led the previously divided councillors to vote 44-0 in favour.

Councillor McConnell’s amendment mollified concerns among opponents that the city could be led into an in-for-a-penny-out-for-a-pound situation, by spelling out specifically that approval of going ahead with negotiations would not “in any way imply city council’s support for or against the airport expansion or the introduction of jets.” It ensures all that neither the plans or planes will fly unless both live up to their promise by meeting the most rigorous standards in terms of noise of any urban airport in North America.

It is ironic that opposition focused on noise, because whisper jets like the CS100 are equipped with a brand new kind of jet engine, technically known as a geared turbofan. Whisper jets are two to four times quieter than all previous commercial jet engines, as reported by this writer in The Bulletin online edition March 28.

They are the first-ever jet engines as quiet as turboprops and will have less impact on the environment in terms of both noise and pollution than the Bombardier Q400 turboprop aircraft currently serving Billy Bishop airport.

Robert Deluce, founder and chairman of Porter Airlines, said, “The adoption of the city staff report and recommendations puts a framework in place that will ensure relevant questions are answered and we believe will ultimately lead to an approval of whisper jets and longer-range destinations.”

Still to come is Transport Canada and U.S. Federal Aviation Administration certification of the Bombardier CS100, including confirmation that it meets or beats the stringent noise standards at Billy Bishop. That milestone is expected to be achieved within the next year however, because CS100s have been in test flights since last September. Testimony during council deliberations attested to the fact that so far, Bombardier’s new whisper jet is living up to its promise.

In an interview regarding the council vote, Councillor McConnell said a decision could take three years: “What we are hearing is strictly talk about those positively impacted, but not those who live and are directly impacted. There are many more questions than answers.

“The deputy mayor also moved for a staff report at the executive to further research that and many other questions. Mr. Deluce framed this as a victory.”

Seeing the formerly divided councillors come together in such a positive way indicates both how important this issue is and how well Toronto’s councillors were able to overcome their differences and see the big picture. Far more is at stake than offering Toronto’s elite leisure-access to the world. Once fully approved next year, the service will also provide the world access to Toronto.

Having an airport within minutes of Downtown is a feature that no other North American city can offer. By giving both business and vacation travellers alike such time-saving and money-saving convenience, Torontonians can expect to see tens of thousands of new visitors spending tens of millions of dollars in their city.

Councillors also seemed swayed by the fact that more than a benefit for Toronto’s own future is at stake. Because whisper jets are the future of aviation, Toronto’s support will have significant impact of the economic future of Canada.

Commercial aircraft and engine manufacturers around the world are quickly transitioning to the leaner and greener technology and Canada’s own Bombardier is leading the way. Thousands of direct and many thousands of related high-tech Canadian jobs are involved, from Downsview airport in Toronto to manufacturing plants in Quebec and around the nation.

Whisper jets are as quiet as they are because less noise means less energy is lost. That translates into lower fuel-use and less pollution. They will be the cleanest and greenest commercial jets ever flown.

With so much on the line for so many, expect a full-court press to win final approval for the new service within the next year. To win over any remaining doubters, Porter Airlines and Bombardier would be well served by bringing one of their new whisper jets to Toronto for a flyover. If flown at the lowest level allowed of only one thousand feet (300 metres) above ground level, residents would be able to see and hear for themselves just how astonishingly quiet Bombardier’s new whisper jet really is.

Ian Steer, a local resident, is a scientist and aeronautics enthusiast