Posted by: Bulletin Editor May 12, 2014 Comments Off on The Dear Sadie letters and Toronto’s First Post Office 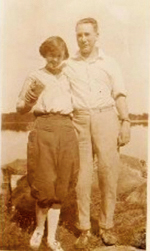 In a time when >whassup? serves as a greeting, >sweetheart has been replaced by >hookup and cursive writing supplanted by digits, Toronto’s First Post Office at its AGM on May 12  offers us a glimpse into the gentle art of letter writing, even in a turbulent time.

The Dear Sadie Letters, curated by Stewart Boden of the Archives of Ontario, presents letters sent to Coboconk, Ont.-born Sara Elizabeth (Sadie) Arbuckle of 930 Queen St. E., Toronto, from Lieut. Harry Mason in 1915 and 1916. In July of 1915 he enlisted in the Canadian Expeditionary Force to fight in the Great War of 1914.

The unique thing about these particular letters is that Archives of Ontario has both sides. They also have Sadie’s letters to Lieut. Harry Mason.

“…Should my body die over there Sweetheart, please ever remember…that I wasn’t afraid and that till the very end of all the worlds I loved only you.”

Lieut. Mason was killed in action in 1917. Sadie married at the ripe old age of 32 to a dental surgeon, Doc Loucks, had a son and has grandchildren who provided the only pictures of her after >The Star wrote a story on the love letters and revealed they did not have a photo of her, only of Mason.

The Dear Sadie Letters are part of Ontario Archives commemoration of the 100-year anniversary of the First World War.

The presentation will follow the business meeting of Toronto’s First Post Office. The meeting starts at 7 p.m. Admission is free for Toronto Historical Society members and $10 for non-members.

2014-05-12
Bulletin Editor
Previous: Local actor tries his luck with as producer of street craps project
Next: Front and Cherry site to be transferred to Aboriginal health care group