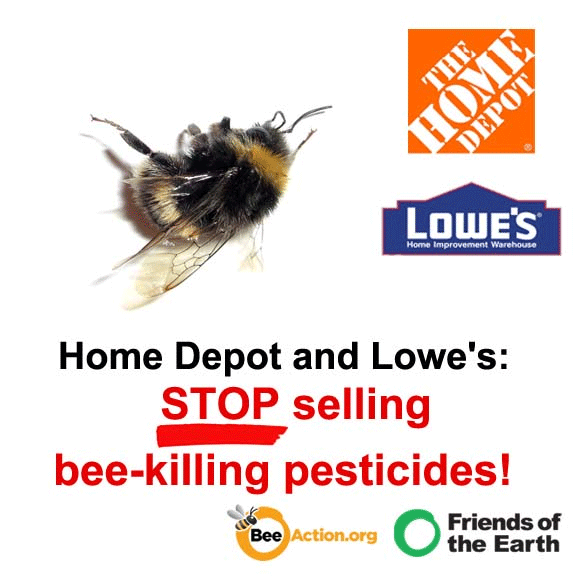 Last month a new report by Friends of the Earth revealed that pesticides implicated in the global bee die-off may be lurking in our own backyards. More than half of the “bee-friendly” home garden plants tested, sold at stores like Home Depot and Lowe’s, contained bee-killing pesticides called neonicotinoids (neonics) — with no warning to consumers.

Our coalition and nearly 200,000 people have asked Home Depot and Lowe’s to stop selling “pre-poisoned” plants and off-the-shelf bee-killing pesticides. So far neither company has responded.

So now we’re upping the “buzz” to protect bees!

Join us today in a social media “swarm” on Facebook and Twitter to send Home Depot and Lowe’s an urgent demand:  “Stop selling bee-killing pesticides and pre-poisoned ‘bee-friendly’ plants!”

Bees are essential to our food system and are dying at alarming rates. Neonic pesticides are a key part of the problem.  But we have the power to fix the problem, starting with our own backyards.

Here’s the thing. We know Home Depot and Lowe’s can do it! Europe has banned bee-harming pesticides and top retailers in the UK are refusing to sell them. Friends of the Earth is challenging top garden retailers to make the same commitment here in North America.

The bees have enough troubles — our backyard gardens should be havens for bees — not death traps.

Bee part of the solution! Join us today on Home Depot and Lowe’s Facebook pages to tell these home and garden giants to step up and protect bees.