Take your lunchtime walk in the clouds

Posted by: Bulletin Editor March 20, 2015 Comments Off on Take your lunchtime walk in the clouds

The city’s parks department hopes to have a Downtown gem ready to re-open to the public this March.

It’s the newly-retrofitted conservatory at Cloud Gardens Park in the heart of the financial district, south of Queen and east of Bay. 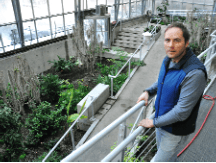 When all the planting is done it’ll have between 50 and 75 species of tropical plants, the kind found in Costa Rica, Madagascar, India, China and Australia, says Curtis Evoy, foreperson of plant production with the city’s parks department.

The conservatory is popular with the business community and cyclists, says Evoy. “They come in and read a book and have their lunch. The bike couriers like to come in in the winter and warm up from their day out there on the streets.”

A new computer system will regulate misting. “We’re trying as best we can to duplicate a cloud forest setting in a city,” says Evoy. “They (cloud forests) are high elevation. They’re quite cool, but there’s lots of humidity and moisture.”

The closest Canada has to a cloud forest would be in B.C., he says.

One of the strangest plants in the conservatory is called a bromeliad. It doesn’t have a big root system so it’s shaped like a vase to catch rain for moisture. “Their root system is just for anchoring themselves,” says Evoy.

There’s no small wildlife in the conservatory like the fish and turtles at the Allan Gardens greenhouse. Nevertheless, when the vents are opened to cool the plants on hot summer days starlings, sparrows and even butterflies find there way in.

The vents are important, says Evoy. “Our biggest challenge here is trying to keep it cool enough in the summertime because it gets awful hot.”

Like parents, who sometimes buy clothes their children will grow into, the parks department has designed the conservatory with lots of air space for the plants to grow tall. “Right now this is a young garden. People should come back regularly to see it grow and progress. Some of these new trees, in five to 10 years, they’ll be 30 feet tall.” says Evoy.

The Cloud Gardens conservatory will be open Monday to Friday from 10 a.m. to 2:30 p.m.