Sun’s Donato, 3 others on Italian Walk of Fame

Posted by: Bulletin Editor May 31, 2014 Comments Off on Sun’s Donato, 3 others on Italian Walk of Fame 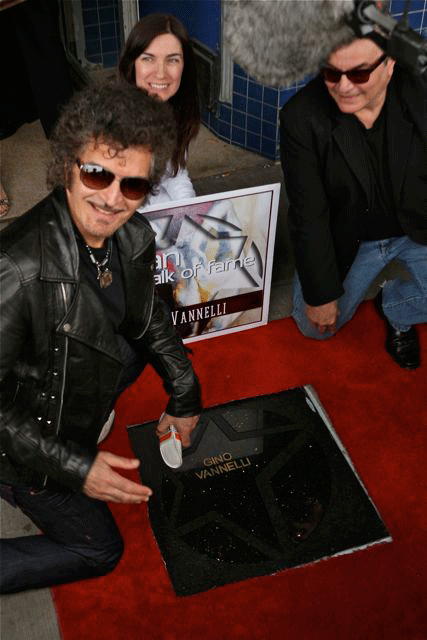 After 50 years of drawing the news of the day, the award-winner was honoured in May with a star on the Italian Walk of Fame in Little Italy.

Donato’s popularity made him the perfect choice for the walk, co-founder Jimi Bertucci said.

Politicians and celebrities have said they feel honoured if Donato and Eric, his signature pet budgie, take a poke at them with the art stick.

Donato, in his familiar jovial demeanour, joked the award came as a surprise.

“I never would have dreamed this. Usually when you win an award you put it on the wall, but this goes into the cement forever … but the way Toronto is going with its roads, they may rip it up someday,” he said.

Donato said he would rather draw the event than stand in front of his star in the sidewalk and put the experience into words.

“If you gave me a list of things (to happen) this is something I would have expected to be last on my list. I love it,” he said.

Donato is a cartoonist of 50 years, an accomplished artist, a Day-Oner at the Sun and a great guy, Sun Publisher Mike Power told the crowd.

“Andy always said his job is to comfort the afflicted and afflict the comfortable,” Power said.

“This is a special and well-deserved honour for Donato,” Sun Editor-in-Chief Wendy Metcalfe said.

“He is such a colourful character, full of creativity and wit. Underlying his abundance of talent is also a remarkable passion for telling life like it is,” she said.

“He has done so for decades now, with brilliant cartoons gracing the pages of the Toronto Sun, never ceasing to get a laugh or force readers to think. We are all very pleased for Andy today, and we continue to feel proud to work with a Toronto Sun legend.”

Rita DeMontis, the Sun’s National Food Editor, and likely another sidewalk-star candidate in the future, said it’s wonderful when astonishing individuals are honoured.

“Kudos to Andy. He is proud of his Italian heritage as well as his Canadian heritage,” DeMontis said.

On Wednesday evening, Donato was honoured at a gala event at the Riviera Parque Convention in Concord.

Mantegna said Toronto has been like a second home for the past 25 years.

“I grew up in an Italian neighbourhood in Chicago and I know this city as well as my hometown. I have travelled the world and I describe Chicago as the Canada of America,” Mantegna said.

Vannelli said learning of the award made him feel like a “little kid.”

“Seeing everyone here makes it real. This is an excuse for a party,” Vannelli said.

2014-05-31
Bulletin Editor
Previous: Distillery owners believe existing heritage protection is sufficient
Next: Toys for boys who’ve got kids of their own